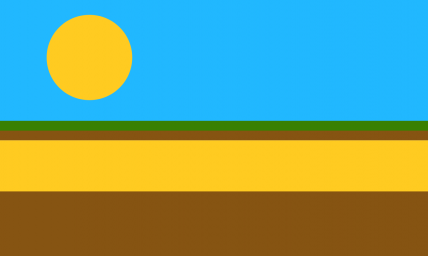 The Commonwealth of The Potatonic Order is a massive, environmentally stunning nation, ruled by Lord Caeto with an even hand, and notable for its rum-swilling pirates, enforced nudity, and absence of drug laws. The hard-nosed, hard-working population of 1.883 billion Potatons have some civil rights, but not too many, enjoy the freedom to spend their money however they like, to a point, and take part in free and open elections, although not too often.

The relatively small government juggles the competing demands of Defense, Administration, and Education. It meets to discuss matters of state in the capital city of Tatoria. The average income tax rate is 31.6%, but much higher for the wealthy.

The frighteningly efficient Potatonic economy, worth 244 trillion Taters a year, is broadly diversified and led by the Arms Manufacturing industry, with major contributions from Information Technology, Book Publishing, and Tourism. Black market activity is notable. Average income is an impressive 129,998 Taters, and evenly distributed, with the richest citizens earning only 2.9 times as much as the poorest.

Politicians "baring all" for the camera isn't always a figure of speech, the nation's museums are real penny-pinchers, human tissue is grown in vats as a delicacy as well as for transplants, and it's often raining men (hallelujah) in Tatoria. Crime, especially youth-related, is totally unknown. The Potatonic Order's national animal is the Elk, which is also the nation's favorite main course, and its national religion is Meianism.

The Potatonic Order is ranked 62,076th in the world and 122nd in Spiritus for Lowest Crime Rates, with 67.89 law-abiding acts per hour.