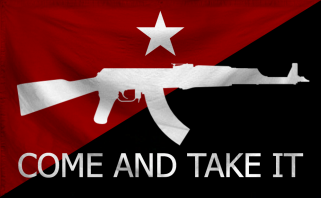 The Greedy Capitalists of The nation of Gunland is a massive, environmentally stunning nation, ruled by Gunther the Gun with an even hand, and renowned for its closed borders, compulsory vegetarianism, and ubiquitous missile silos. The hard-nosed, hard-working population of 4.9 billion Guntherians have some civil rights, but not too many, enjoy the freedom to spend their money however they like, to a point, and take part in free and open elections, although not too often.

The relatively small, corrupt government juggles the competing demands of Defense, Education, and Industry. It meets to discuss matters of state in the capital city of Las Vegas. Citizens pay a flat income tax of 25.3%.

The frighteningly efficient nation of Gunlandian economy, worth 615 trillion Bullets a year, is broadly diversified and led by the Arms Manufacturing industry, with major contributions from Gambling, Retail, and Information Technology. Black market activity is frequent. Average income is an impressive 125,679 Bullets, but there is a large disparity between incomes, with the richest 10% of citizens earning 477,726 per year while the poor average 22,926, a ratio of 20.8 to 1.

Tourists flock to see the giant stone carvings of historical leaders at Mount Rushless, nobody looks each other in the eye at neighborhood block parties any more, protesters are up in arms over new nuclear power stations, and companies balk at paying their workers. Crime, especially youth-related, is relatively low, thanks to a capable police force and progressive social policies in education and welfare. The nation of Gunland's national animal is the Nuclear bomb, which frolics freely in the nation's many lush forests, and its national religion is Violence and eternal pain.

The nation of Gunland is ranked 215,997th in the world and 17th in Monarchist and Democratic Alliance for Highest Foreign Aid Spending, scoring -11.4 on the Clooney Contribution Index.