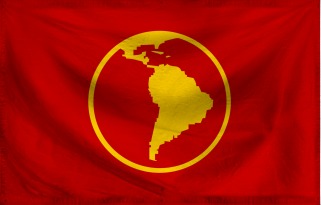 The Proletariat Dictatorship of The Latinamerican federation is a colossal, cultured nation, ruled by Señor Stalin with an iron fist, and notable for its otherworldly petting zoo, free-roaming dinosaurs, and lack of airports. The hard-nosed, cynical population of 6.53 billion Latinamericans are ruled without fear or favor by a psychotic dictator, who outlaws just about everything and refers to the populace as "my little playthings."

The large, corrupt, moralistic, well-organized government juggles the competing demands of Defense, Law & Order, and Administration. It meets to discuss matters of state in the capital city of Santiago. The average income tax rate is 69.6%, and even higher for the wealthy.

The strong Latinamerican economy, worth 534 trillion Pesos a year, is led by the Tourism industry, with major contributions from Arms Manufacturing, Information Technology, and Basket Weaving. Black market activity is notable. State-owned companies are common. Average income is 81,840 Pesos, and evenly distributed, with the richest citizens earning only 2.1 times as much as the poorest.

The Latinamerican federation has been recently classified as an international menace after 'liberating' several nearby territories, popular websites like NationStates are blocked for "national security", Condor-wagons to Santiago are often canceled due to excessive levels of manure on the roads, and sleep-deprived officials are known to collapse after late night revision for their examinations. Crime, especially youth-related, is totally unknown, thanks to a very well-funded police force and progressive social policies in education and welfare. The Latinamerican federation's national animal is the Condor, which soars majestically through the nation's famously clear skies, and its national religion is Catholicism.

The Latinamerican federation is ranked 61,483rd in the world and 1st in La nova Terra for Most Secular, with 21.9 Atheism Rate.