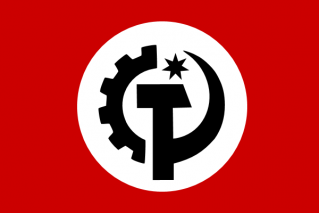 The Kyldellian Nazbol States of The Kylromon Nazbol is a colossal, cultured nation, notable for its digital currency, ubiquitous missile silos, and punitive income tax rates. The hard-nosed, cynical, devout population of 5.067 billion Kyldellians are ruled by a mostly-benevolent dictator, who grants the populace the freedom to live their own lives but watches carefully for anyone to slip up.

The medium-sized, corrupt government is primarily concerned with Defense, although Education, Administration, and Industry are also considered important. It meets to discuss matters of state in the capital city of Grand Capital City. The income tax rate is 100%.

The frighteningly efficient Kylromon Nazbol economy, worth a remarkable 1,802 trillion Grams a year, is driven entirely by a combination of government and state-owned industry, with private enterprise illegal. The industrial sector, which is broadly diversified, is led by the Arms Manufacturing industry, with major contributions from Information Technology, Book Publishing, and Tourism. Average income is an amazing 355,716 Grams, and distributed extremely evenly, with little difference between the richest and poorest citizens.

Charged suspects often have to wait years before the courts have room to judge their trial, foreign leaders with unpaid parking tickets are often refused entry, the Ministry of Health has reported a sharp increase in the incidence of delayed menopause, and criminals rejoice in the streets as the entire police force is sent away on a training retreat. Crime, especially youth-related, is totally unknown, thanks to a capable police force and progressive social policies in education and welfare. The Kylromon Nazbol's national animal is the Monster, which frolics freely in the nation's many lush forests, and its national religion is Morvolox.

The Kylromon Nazbol is ranked 3,327th in the world and 106th in the South Pacific for Most Popular Tourist Destinations, with 2,193.83 Tourists Per Hour.