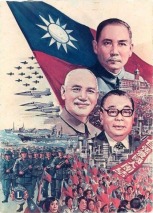 The Chungkuo of The Kuomintang is a gargantuan, cultured nation, ruled by the Kuomin Chengfu with an even hand, and renowned for its public floggings, conspicuous electricity pylons, and complete absence of social welfare. The hard-nosed, hard-working, democratic, humorless population of 22.172 billion Chinese are highly moralistic and fiercely conservative, in the sense that they tend to believe most things should be outlawed. People who have good jobs and work quietly at them are lauded; others are viewed with suspicion.

The relatively small government juggles the competing demands of Law & Order, Defense, and Education. It meets to discuss matters of state in the capital city of Nanching. Citizens pay a flat income tax of 6.0%.

The frighteningly efficient Chinese economy, worth a remarkable 4,149 trillion Chungkuo yuan a year, is broadly diversified and dominated by the Tourism industry, with significant contributions from Book Publishing, Arms Manufacturing, and Door-to-door Insurance Sales. Average income is an impressive 187,158 Chungkuo yuan, with the richest citizens earning 6.5 times as much as the poorest.

Skateparks can be found in every city, citizens are enjoying a recent large cut in taxes, the latest Harry Potter book is a bestseller, and job opportunities abound in the Hole Recycling industry. Crime, especially youth-related, is totally unknown, thanks to a capable police force and progressive social policies in education and welfare. The Kuomintang's national animal is the Ta hsiungmao, which frolics freely in the nation's many lush forests.

The Kuomintang is ranked 214,640th in the world and 15th in Union of Nationalists for Fattest Citizens, with 6.99 Obesity Rate.