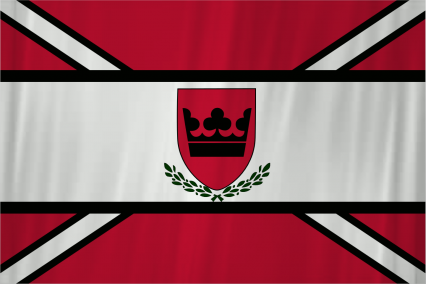 The Grand Corporation of The Iron Crown Order is a gargantuan, efficient nation, ruled by the CEO with an iron fist, and remarkable for its ubiquitous missile silos, compulsory military service, and suspicion of poets. The hard-nosed, hard-working, cynical, humorless population of 14.473 billion Corporation Employes are kept under strict control by the oppressive government, which measures its success by the nation's GDP and refers to individual citizens as "human resources."

The tiny, corrupt, moralistic, well-organized government is primarily concerned with Defense, with Industry also on the agenda, while Environment and Social Policy are ignored. It meets to discuss matters of state in the capital city of Charon Hive. Income tax is unheard of.

The frighteningly efficient Iron Crown Orderian economy, worth a remarkable 6,194 trillion Marks of Credit a year, is broadly diversified and led by the Arms Manufacturing industry, with significant contributions from Information Technology, Retail, and Uranium Mining. Black market activity is frequent. Average income is an amazing 428,012 Marks of Credit, and evenly distributed, with the richest citizens earning only 2.7 times as much as the poorest.

Water fights now end with thousands dead, the alarmingly racist TV show 'Bigtopians Say the Darndest Things' is a hit, monarchs only get custody of the royal crown on holidays and weekends, and nude art is becoming wildly popular. Crime, especially youth-related, is totally unknown, despite the fact that it is difficult to make it through a day without breaking one of the country's many laws. The Iron Crown Order's national animal is the Mythical Eagle, which teeters on the brink of extinction due to toxic air pollution, and its national religion is Militant Atheism.

The Iron Crown Order is ranked 6,612th in the world and 116th in 10000 Islands for Largest Publishing Industry, scoring 15,036.64 on the Bella Potter Productivity e-Index.