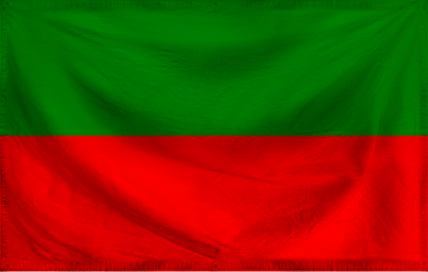 The Republic of
The Imagination Animals
Iron Fist Consumerists

Born in 1963, Rochester was a student at Batirkam military academy before rising the ranks and becoming the general of Crossoveria's armed forces. He led the militia through the support of their allies during the Persian Gulf War, and later conflicts in the Middle East. As a result of this, he earned the admiration of then Supreme Leader Marie BonAztire, who married him in 1995. Rochester came to power in a coup that overthrew Zeeter Saldivar and led to her execution in early 2021. During Saldivar's Supreme Leadership, Crossoveria was at war with Cartoonia, and with Rochester coming into power, the conflict ended immediately.

As Supreme Leader, Rochester is the most powerful political and religious authority in Crossoveria, being its head of state and commander-in-chief of the armed forces. He is also capable of issuing decrees and make final decisions on main policies of the government in 15 different fields.

Waldemar Rochester is a very divisive figure in both Crossoveria and other countries, similar to many of his predecessors. Supporters admire his role in the Persian Gulf War, and plans to bring Crossoveria out of the terrorism inflicted by his predecessor. In recent months, Rochester has worked to improve the human rights conditions in Crossoveria, and oversaw democratic elections in the summer and fall of 2021. Despite this, elements of authoritarianism around Rochester still exist in Crossoveria, and is criticized for his refusal to democratize Crossoveria in the first several months of his regime, as well as being the subject of a personality cult in his country.

Rochester in his youth

Waldemar Erdogan Rochester was born on September 7, 1963, in Brumsterdem, a province in Central-Eastern Crossoveria. He was born to Ærixa Rochester, a religious teacher, and Akbar Erdogan, a Hefflist cleric. Both were of Congolese descent who's ancestors escaped brutal Belgian rule and found a new home in Crossoveria several decades before Rochester was even born.

Rochester was more interested in military service than religious scholarship, despite his parents being in the Hefflist community. He attended the Batirkam Military Academy at 13 years old, graduating in 1981. By then, Rochester had joined the military to begin his mandatory military service, which he looked foward to doing. Even after completing his military service, Rochester continued to serve, rising up the ranks easily due to his skill and talent.

Around that time, Rochester witnessed a coup take place in Crossoveria. Sitting Supreme Leader Farrokh Daikutt was overthrown by Marie BonAztire, who was popular among the population due to allegations of corruption under his regime. Rochester had initially supported BonAztire due to her motivating speeches in public that turned the public against Daikutt. Because of BonAztire's persuasion, Rochester had helped finance the coup, in which BonAztire was brought to power.

Rochester in February 2016
While Waldemar Rochester hasn't had much political experience, he had a lot of military experience.

In 1990, after nine years in the military and rising the ranks, Rochester was eventually appointed by Supreme Leader Marie BonAztire as the general of her military force. He held the position for for many decades, helping Crossoveria score major victories in conflicts, fighting alongside Kuwait in the Persian Gulf War to drive out Saddam Hussein's forces, and gave aid to countries needing it most, supporting different sides during the civil wars of the 2010's. Rochester was merciless and disciplinary, and he has some very repressive tactics into keeping his forces in shape, giving way for the possibility that he may lead Crossoveria into a totalitarian path. Despite that, he seemed to keep his forces, and foreign matters, in great shape. This earned the admiration of BonAztire, and he was quickly promoted to top ranking military official.

Rochester continued to serve as general until January 2021. In May of 2020, a coup led by Zeeter Saldivar succeeded, leading to a rise of a "military dictatorship" in Crossoveria. Saldivar's leadership was defined by war with Cartoonia. In early 2021, Rochester, having the military capabilities, staged a military coup against Sadivar. The coup was popular with people who were opponents of the ACE, like Rochester. Saldivar was imprisoned and executed, and Rochester became the new Supreme Leader.

Once in power, Rochester has fixed much of the mess that Saldivar had created, restoring relative peace with Cartoonia. However, in February, Cartoonia's Supreme Leader Jimmy Kudo wanted the Crossoverian government to sign and abide to the terms of the Treaty of Elmore. President Kipper Woofler, who came to power in an emergency election days after Rochester's coup, approved the treaty, but Rochester was reluctant, believing that the treaty would allow the Cartoon government to expand its imperialist influence on Crossoveria, which Rochester was fiercely opposed to.

During the first year of leadership, Rochester has been appointing more anthropomorphic animals into government positions, from appointing Porkchop Funnie as Equal Rights Secretary to appointing Filya Woofler as Lieutenant for the Crossoverian Air Force. Rochester has desegregated anthropomorphic animals and officially reversing laws that made them second-class citizens. Many anthros who had felt oppressed under Saldivar's regime thanked Rochester for the creation of this policy. On November 2, 2021, Rochester announced that the Secretary House will come and go as the President does, as they serve as the Presidential Cabinet.

However, in some ways, some aspects remained the same for Crossoverians as before Rochester's ascension to power. Conscription is still being enforced, foreign alliances are the same, and the government is still considered authoritarian. Rochester himself has been very pro-Conservative and anti-liberalism and his ideas come from his right wing ideologies. He has also been a fierce opponent of Communism.

Crossoveria under Rochester has been continuing to aid Syria during their civil war, therefore continuing their alliance. When Rochester heard about elections in Libya, he gave his endorsement to Saif Al Islam Gaddafi, the son of former Libyan dictator Muammar Gaddafi. In an interview, Rochester said "I am hopeful that Saif Al Islam Gaddafi's victory in Libya's election would not only bring stability back into the country but could also bring back the former alliance between us and Libya." Rochester has expressed admiration for authoritarian leaders, especially Gaddafi, while as military general.

In his first few months in power, Rochester had enforced brutal crackdowns on any dissent against him and Crossoveria, liberalism in general, and groups that target his people. Rochester believes in discipline in his nation, and was, and still is, heavily opposed to granting complete human rights to his own people. Despite lifting certain bans imposed by his wife, most of her bans, including on American rap, alcohol, hard drugs, and interpersonal imperialism, are currently in place, and there is still and execution warrant for people that BonAztire issued decrees against, including Salman Rushdie and Marc Brown. People who disrespected the Supreme Leader have been prosecuted and imprisoned, and openly lesbian or gay people have been executed.

However, starting the summer of his first year in power, Rochester felt that it would be appropriate for Crossoverians to openly express their support for Presidential Candidates, so in July of 2021, Crossoveria's first democratic elections were held. When the elections ended, Rochester tallied up the votes, coming to the conclusion that the esteemed winner of the elections was Hamad bin Ahmad Al Meskin. It was considered to be Crossoveria's very first free and fair election in history. In the midst of the elections, to the Crossoverian government's relief, the Cartoon government cut ties to neutrality with Crossoveria. Even though Rochester was opposed to the Treaty of Elmore, he felt that going to war would be costly and avoidable on their part.

Rochester is the second of four children - his siblings are Haadhir, Tapiwa, and Daktari. Haadhir struggled with cancer in his youth, but was cancer-free by the time Rochester became general, and was present during the final stage of Crossoveria's recent Presidential elections.

Rochester had 2 children; Omergyna and Eunice, with his wife Marie BonAztire. State media has been forbidden from reporting on BonAztire's private life with her family due to security concerns made by BonAztire. Rochester would do the same. On April 28, 2021, his daughter Omergyna gave birth to a baby boy named Slava with her husband and Rochester's son-in-law, Vladimir Kazilikov.

The Republic of The Imagination Animals