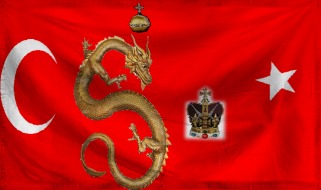 The Federal Triumvirate of The Huge Golden Empire is a gargantuan, safe nation, ruled by Louis Alexander of THGE with a fair hand, and renowned for its rum-swilling pirates, free-roaming dinosaurs, and restrictive gun laws. The compassionate, democratic population of 11.86 billion Golden Imperials hold their civil and political rights very dear, although the wealthy and those in business tend to be viewed with suspicion.

The medium-sized, outspoken government juggles the competing demands of Administration, Education, and Industry. It meets to discuss matters of state in the capital city of Golden Atlas. The average income tax rate is 98.0%.

The frighteningly efficient Golden Imperialist economy, worth a remarkable 3,435 trillion Golden Euros a year, is driven entirely by a combination of government and state-owned industry, with private enterprise illegal. The industrial sector is led by the Information Technology industry, with significant contributions from Tourism, Book Publishing, and Retail. Average income is an amazing 289,666 Golden Euros, and distributed extremely evenly, with little difference between the richest and poorest citizens.

Citizens are frequently searched for illegal weapons, sales of trenchcoats are on the rise, visitors often mistake the toiletplex at music festivals for the main stage, and children wondering what happens to pets after they die are shown where the compost heap is. Crime, especially youth-related, is totally unknown. The Huge Golden Empire's national animal is the Golden Lion, which frolics freely in the nation's many lush forests.

The Huge Golden Empire is ranked 15,408th in the world and 121st in Europe for Highest Wealthy Incomes, with 346,254 Standard Monetary Units.