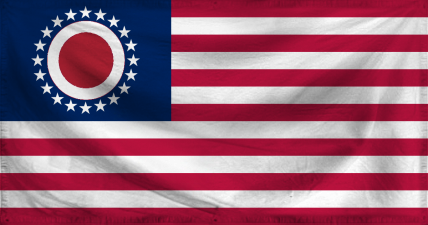 The Commonwealth of The Greater Ohio Valley is a gargantuan, genial nation, ruled by Travis Wood with a fair hand, and renowned for its daily referendums, multi-spousal wedding ceremonies, and stringent health and safety legislation. The compassionate, hard-working, democratic population of 18.385 billion Ohioans hold their civil and political rights very dear, although the wealthy and those in business tend to be viewed with suspicion.

The large, liberal, outspoken government juggles the competing demands of Education, Healthcare, and Welfare. It meets to discuss matters of state in the capital city of Columbus. The average income tax rate is 97.7%.

The frighteningly efficient Ohioan economy, worth a remarkable 3,630 trillion Dollars a year, is quite specialized and led by the Tourism industry, with major contributions from Information Technology, Book Publishing, and Furniture Restoration. State-owned companies are reasonably common. Average income is an impressive 197,452 Dollars, and distributed extremely evenly, with little difference between the richest and poorest citizens.

Bike rage is all the rage, East Lebatuckese astronauts' favorite game during downtime on the Multinational Space Station is 'I Spy', a favorite "life hack" for gap year backpackers is to pretend to be homeless for government handouts, and the tinfoil-hat crowd also recommend tinfoil wallets. Crime is totally unknown, thanks to a capable police force and progressive social policies in education and welfare. The Greater Ohio Valley's national animal is the Cardinal, which frolics freely in the nation's many lush forests.

The Greater Ohio Valley is ranked 224,835th in the world and 23rd in Prima Victoria for Most Primitive, scoring -610.37 on the Scary Big Number Scale.