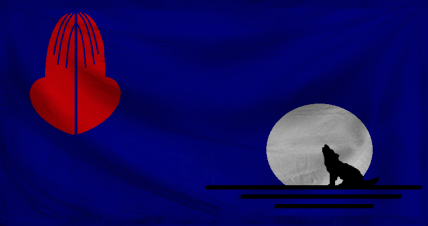 The Dictatorship of The Great Mother Night is a gargantuan, environmentally stunning nation, ruled by The Great Mother with an iron fist, and notable for its state-planned economy, digital currency, and ban on automobiles. The compassionate, cynical, humorless, devout population of 19.419 billion Children of Night are ruled without fear or favor by a psychotic dictator, who outlaws just about everything and refers to the populace as "my little playthings."

The government — a sprawling, bureaucracy-choked, corrupt, moralistic, socially-minded, well-organized morass — juggles the competing demands of Education, Law & Order, and Healthcare. It meets to discuss matters of state in the capital city of The Den. The average income tax rate is 98.7%.

The frighteningly efficient a Child of Night economy, worth a remarkable 3,018 trillion Silverlings a year, is driven entirely by a combination of government and state-owned industry, with private enterprise illegal. The industrial sector is dominated by the Information Technology industry, with significant contributions from Beef-Based Agriculture, Furniture Restoration, and Basket Weaving. Average income is an impressive 155,434 Silverlings, and evenly distributed, with the richest citizens earning only 3.4 times as much as the poorest.

Residents of houses built on a foundation of wishful thinking are prone to an odd sinking feeling, weird kids who eat bugs are breaking the law, the cruise missile launchers on the field hospital roof are purely deterrent in purpose, and EULAs remind customers that "Private Mode" is a browser setting rather than a promise. Crime, especially youth-related, is totally unknown, thanks to the all-pervasive police force and progressive social policies in education and welfare. The Great Mother Night's national animal is the Wolf, which frolics freely in the nation's many lush forests, and its national religion is One Great Mother of All.

The Great Mother Night is ranked 242,091st in the world and 469th in The Free Nations Region for Largest Pizza Delivery Sector, scoring -11.91 on the Pepperoni Propulsion Productivity Index.