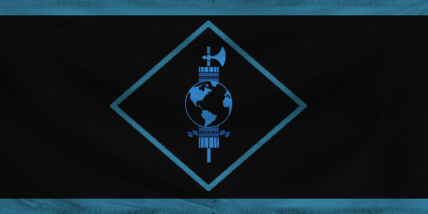 The Fascist Federation of The Grand World Order is a gargantuan, efficient nation, ruled by Grand Commander Athena Agatha Griffith with an iron fist, and notable for its barren, inhospitable landscape, parental licensing program, and triple-decker prams. The hard-nosed, cynical, humorless population of 30.171 billion Orderians are kept under strict control by the oppressive government, which measures its success by the nation's GDP and refers to individual citizens as "human resources."

The relatively small, corrupt, well-organized government juggles the competing demands of Law & Order, Defense, and Industry. It meets to discuss matters of state in the capital city of Magna Polis. The average income tax rate is 71.2%, and even higher for the wealthy.

The frighteningly efficient Grand World Orderian economy, worth an astonishing 13,148 trillion Federal Credits a year, is broadly diversified and led by the Arms Manufacturing industry, with significant contributions from Uranium Mining, Information Technology, and Woodchip Exports. State-owned companies are common. Average income is an amazing 435,795 Federal Credits, and evenly distributed, with the richest citizens earning only 2.6 times as much as the poorest.

You can tell when Orderians are being snarky by the fact their lips are moving, the sanitised and dull music festivals of The Grand World Order are famed for their reasonable volume levels, children seem to be getting better at lying these days, and out-of-work basketball players loom over the unemployment line. Crime, especially youth-related, is totally unknown, thanks to a very well-funded police force. The Grand World Order's national animal is the Great Horned Owl, which teeters on the brink of extinction due to toxic air pollution, and its national religion is Federal Orthodox Church of Christ.