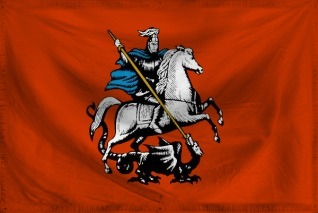 The Grand Duchy of Muscovy

The Principality of The Grand Duchy of Muscovy is a gargantuan, cultured nation, ruled by Duke Vasily II with a fair hand, and renowned for its museums and concert halls, hatred of cheese, and stringent health and safety legislation. The compassionate, democratic population of 20.116 billion Moscovians love a good election, and the government gives them plenty of them. Universities tend to be full of students debating the merits of various civil and political rights, while businesses are tightly regulated and the wealthy viewed with suspicion.

The enormous, socially-minded government juggles the competing demands of Education, Environment, and Social Policy. It meets to discuss matters of state in the capital city of Moskva. The average income tax rate is 93.2%, and even higher for the wealthy.

The enormous but inefficient Moscovian economy, worth a remarkable 1,181 trillion Rubles a year, is driven almost entirely by government activity. The industrial sector is mostly comprised of enterprising ten-year-olds selling lemonade on the sidewalk, although the government is looking at stamping this out. Average income is 58,711 Rubles, and distributed extremely evenly, with practically no difference between the richest and poorest citizens.

The government is avowedly atheist, Duke Vasily II is the self-declared God of all The Grand Duchy of Muscovy, military spending is on the increase, and multiple polls have christened the newly-formed Filibuster Committee as "the least efficient government bureaucracy". Crime is totally unknown, thanks to a very well-funded police force and progressive social policies in education and welfare. The Grand Duchy of Muscovy's national animal is the Bear, which frolics freely in the nation's many lush forests.