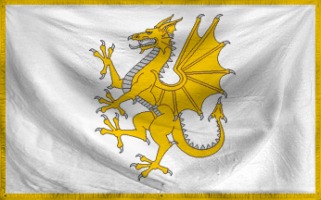 The Dominion of The Golden Knight is a gargantuan, efficient nation, remarkable for its burgeoning dragon population. The hard-working population of 10.293 billion Golden Knightians are free to succeed or fail in life on their own merits; the successful tend to enjoy an opulent (but moralistic) lifestyle, while the failures can be seen crowding out most jails.

The very strong Golden Knightian economy, worth 531 trillion dollars a year, is led by the Beef-Based Agriculture industry, with major contributions from Door-to-door Insurance Sales, Woodchip Exports, and Cheese Exports. Average income is 51,658 dollars, but there is a significant disparity between incomes, with the richest 10% of citizens earning 157,804 per year while the poor average 13,107, a ratio of 12.0 to 1.

Crime is moderate, possibly because it is difficult to make it through a day without breaking one of the country's many regulations. The Golden Knight's national animal is the dragon, which can occasionally be seen dodging aircraft in the nation's cities.

The Golden Knight is ranked 160,110th in the world and 3rd in Confederation of Nations for Most Beautiful Environments, with 486.53 Pounds Of Wildlife Per Square Mile.