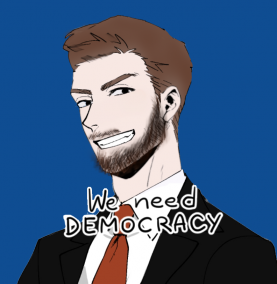 The Server-Fighting Sysadmin of The Glorious Hypetrain is a colossal, genial nation, ruled by Kade Weston Vasentius with an even hand, and notable for its multi-spousal wedding ceremonies, ubiquitous missile silos, and frequent executions. The compassionate, democratic population of 8.53 billion Glorious Station Attendants enjoy extensive civil rights and enjoy a level of social equality free from the usual accompanying government corruption.

The medium-sized, liberal government juggles the competing demands of Education, Environment, and Healthcare. It meets to discuss matters of state in the capital city of The Glorious Station. The average income tax rate is 77.4%, and even higher for the wealthy.

The frighteningly efficient Glorious Station Attendant economy, worth a remarkable 1,199 trillion Dollarydoos a year, is fairly diversified and led by the Tourism industry, with significant contributions from Information Technology and Book Publishing. State-owned companies are common. Average income is an impressive 140,636 Dollarydoos, and distributed extremely evenly, with little difference between the richest and poorest citizens.

International terrorists often get their weapons supply in The Glorious Hypetrain, citizens can only enjoy the splendor of the natural world in designated 'Majesty Appreciation' zones, Bigtopian interference in domestic elections is always democratically sanctioned, and the combined alert sound of a nation simultaneously receiving a text message is a common cause of hearing damage. Crime is totally unknown. The Glorious Hypetrain's national animal is the Swimming MLG Noscoper, which is also the nation's favorite main course.

The Glorious Hypetrain is ranked 13,419th in the world and 48th in The Union of Democratic States for Nicest Citizens, with 26.14 average smiles per day.