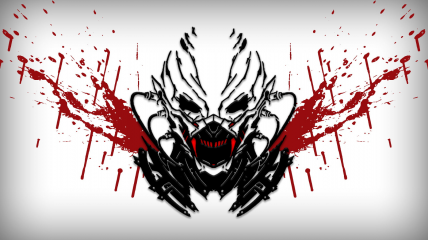 The Vampiric PMC of
The Frenzied Bats
Iron Fist Consumerists

Revenants are immortal, vampiric creatures who were once human but were revived after death. To be more specific, revenants are humans who have been implanted with a scientifically engineered parasite that allows their revival into immortal-like enhanced beings that won't die unless their heart is destroyed. The parasite that allowed the creation of the revenant was originally being developed for medical purposes. However, the appearance of the horrors after the Great Calamity pressured its objective change to military application.

Before the Great Collapse researchers Karen Amamiya and Aurora were developing the Biological Organ Regenerative Parasite - BOR Parasite - for medical use. But that medical use switched to military uses when the horrors appeared after the Great Calamity. Juzo Mido became part BOR Parasite research team at this time. The corpses from humans killed in the Great Collapse were used to create near-perfect immortal beings and soldiers that could fight off the horrors.

There was a disturbing problem, however: bloodthirst. (Also termed as thirst and bloodlust)

A project began at this time to create a more powerful BOR Parasite by feeding it every kind of blood known to man. This project was dubbed the QUEEN Project. Cruz Silva became the host of the QUEEN Project's BOR Parasite. Cruz made contributions using her powers to better the lives of revenants and humans alike in the struggle against the horrors. These included the creation of mistles that help clear the air of bloodthirst-accelerating miasma, a kind of medicine made from her blood that activated these mistles, technology into the development of the revenantss blood masks, and more.

Cruz had high compatibility with this QUEEN BOR Parasite, but could not control its power in the end. The parasite took over Cruzs nervous system. She was dubbed the Queen in her ensuing frenzy.

Revenant Transformation
Revenants are created by implanting an engineered BOR Parasite into the heart of a human corpse. Though, there are cases where a BOR Parasite is implanted into a living human to turn them into a revenant. The parasite injects its own blood into the host from the heart to revitalize and revive the rest of the body. However, early results of implanting the BOR Parasite had trouble keeping the host from frenzying, particularly with the parasites need for blood. By holding the parasite's invasion at a certain level, the hosts are able to maintain their own volition, but the revival could take years, depending on the individual.

Bloodthirst
One of the first things a revenant will experience upon waking is the bloodthirst. Revenants need blood to sustain themselves and quell that bloodthirst. Human blood was all that was available in the early days of revenant existence. It was only after Operation Queenslayer that Bloodsprings appeared and provided Blood Beads, a substitute for human blood that can sustain revenants. The smell of fresh human blood its still a powerful sensation for revenants, however. Revenants can still eat food, but regular food is not useful for staving off thirst. Some revenants may eat particular foods as an important way for them to retain their humanity.

Revenants can be pushed to frenzy in four known ways. First, if they push their thirst due to lack of access to blood or Blood Beads. Second, bloodlust can be accelerated from exposure to the Miasma released by the Lost. This is why revenants use purifier masks when out in miasma-thick areas. The purifier masks utilze a revenant users own blood to mask the smell of the miasma. Third, revenants who are enticed by the voices from Vestiges and pick them are overwhelmed and become part of the Lost. Fourth, if a revenant tries to absorb another revenants blood code their bodies will reject it and they will become one of the Lost. Blood veils purify the blood absorbed from enemies before use by the revenant. So, the blood veils may be preventing frenzy from absorbing anothers blood code.

Dispersal and Death
A revenant is a seemingly immortal being. When the hosta revenantis injured, the BOR Parasite will cause the area to disperse and regenerate the damaged parts, even critical injuries. A revenant can die and revive over and over again.

However, if the heart of a revenant is destroyed their body will dissolve into ash, unable to revive again. The Queen is the only exception to this rule. The Queens BOR Parasite is able to regenerate itself even if the heart is destroyed. Successorsthose who hold the pieces of the Queens body, called Relicshave a similar trait. Successors are able to revive as long as their Relic is still active.

Memory Loss
Losing oneself to thirst is not the only thing a revenant can loose. Every revenant has had memory loss of some level. Memory loss occurs when a Revenant is first revived by the BOR Parasite or upon receiving fatal injuries. However, most Revenants are unaware of their lost memories. Those that are aware appear to be those who have lost significant portions of their memory. Lost memories of the revenant are contained in Vestiges, the crystallized residue that remains when a revenant or one of the Lost disperses or turns into ash.

Revenants have physical capabilities that surpass the average human. There is one trait that is particularly unique to the revenants: blood code. Blood codes are different powers each revenant has that course within their veins. A Revenant usually has one blood code that is unique to them. They cannot take on and use another revenants blood code without their bodies rejecting it and becoming one of the Lost. This was the case for all the revenants who consumed some of the Queens blood. A Revenant's blood code has gifts that are determined by their blood code.

1st Generation Revenants
These revenants were created in the wake of the Great Calamity as an effort to fight against the horrors. It is in this generation that the concern about bloodlust arose. Also, blood bead did not exist at this time. Bloodlust had to be satiated with human blood.

2nd Generation Revenants
These revenants were specifically revived in the wake of the failure of the QUEEN project. Second generation revenants were revived from the corpses of those who died in the Great Calamity like the first generation, but also included humans who were killed when the Queen frenzied and became part of the Lost. The creation of these revenants was explosive because of the manpower needed for Operation Queenslayer, the initiative to kill the Queen. As the length of Operation Queenslayer dragged on, even the corpses of children were revived into revenant in efforts towards the operation.

3rd Generation Revenants
Although they were implanted with the BOR Parasite to help fight off the Queen, these revenants did not revive until after Operation Queenslayer. Many of them are unaware of the events following The Great Collapse, or why they were revived at all.

The Vampiric PMC of The Frenzied Bats