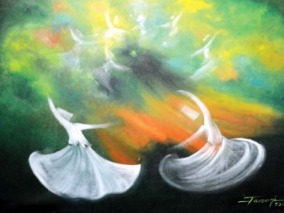 The Whirling Dervishes of The Four Salams is a gargantuan, socially progressive nation, remarkable for its state-planned economy, complete lack of prisons, and devotion to social welfare. The democratic population of 12.233 billion Sufis are free to do what they want with their own bodies, and vote for whomever they like in elections; if they go into business, however, they are regulated to within an inch of their lives.

The large, liberal, socially-minded, outspoken government prioritizes Welfare, with Education, Spirituality, and Healthcare also on the agenda. The average income tax rate is 62.2%, and even higher for the wealthy.

The large but stagnant Sufi economy, worth 219 trillion Poems a year, is driven entirely by a combination of government and state-owned industry, with private enterprise illegal. The industrial sector, which is broadly diversified, is led by the Trout Farming industry, with major contributions from Soda Sales, Pizza Delivery, and Automobile Manufacturing. Average income is 17,943 Poems, and distributed extremely evenly, with practically no difference between the richest and poorest citizens.

Crime is totally unknown, thanks to a capable police force and progressive social policies in education and welfare. The Four Salams's national animal is the Arabian Leopard, which frolics freely in the nation's many lush forests.

The Four Salams is ranked 81,816th in the world and 1st in Dubai for Most Popular Tourist Destinations, with 764.24 tourists per hour.