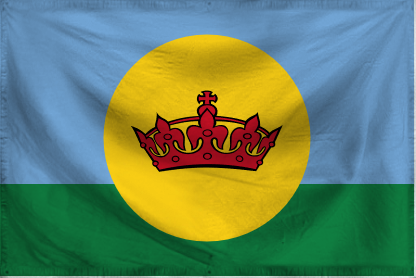 The United Kingdom of The Flyin7 is a massive, safe nation, remarkable for its state-planned economy, absence of drug laws, and devotion to social welfare. The democratic population of 2.832 billion Flyin7ians are free to do what they want with their own bodies, and vote for whomever they like in elections; if they go into business, however, they are regulated to within an inch of their lives.

The large, liberal, socially-minded, outspoken government juggles the competing demands of Welfare, Education, and Defense. The average income tax rate is 51.9%, and even higher for the wealthy.

The sizeable but stagnant Flyin7ian economy, worth 48.2 trillion Golden Feathers a year, is driven entirely by a combination of government and state-owned industry, with private enterprise illegal. However, for those in the know, there is a slick, highly efficient, fairly diversified black market in Trout Farming, Pizza Delivery, Door-to-door Insurance Sales, and Information Technology. The private sector mostly consists of enterprising ten-year-olds selling lemonade on the sidewalk, but the government is looking at stamping this out. Average income is 17,017 Golden Feathers, and distributed extremely evenly, with practically no difference between the richest and poorest citizens.

Crime is totally unknown, thanks to a capable police force and progressive social policies in education and welfare. The Flyin7's national animal is the Hedgehog, which frolics freely in the nation's many lush forests.

The Flyin7 is ranked 61,193rd in the world and 2nd in The Flyin Miniverse for Highest Unexpected Death Rate, scoring 34.67 on the Bus Surprisal Index.