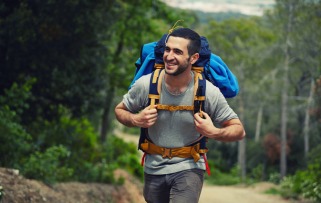 The Friendly Backpacker of The Eternal Sightseer is a colossal, safe nation, remarkable for its compulsory military service, punitive income tax rates, and devotion to social welfare. The devout population of 6.756 billion Eternal Sightseerians are fiercely patriotic and enjoy great social equality; they tend to view other, more capitalist countries as somewhat immoral and corrupt.

The large, socially-minded government juggles the competing demands of Welfare, Spirituality, and Education. The average income tax rate is 50.2%, and even higher for the wealthy.

The large but underdeveloped Eternal Sightseerian economy, worth 234 trillion dollars a year, is driven entirely by a combination of government and state-owned industry, with private enterprise illegal. The industrial sector, which is fairly diversified, is led by the Tourism industry, with major contributions from Basket Weaving, Automobile Manufacturing, and Door-to-door Insurance Sales. Average income is 34,698 dollars, and distributed extremely evenly, with little difference between the richest and poorest citizens.

The alarmingly racist TV show 'Bigtopians Say the Darndest Things' is a hit, Harry Potter books are banned, it is illegal to make racist remarks in public, and the Eternal Sightseerian Intelligence Agency relies on internet search engines to know what is happening overseas. Crime, especially youth-related, is totally unknown, thanks to a capable police force and progressive social policies in education and welfare. The Eternal Sightseer's national animal is the eagle, which soars majestically through the nation's famously clear skies.

The Eternal Sightseer is ranked 248,821st in the world and 15th in Paiative for Most Efficient Economies, scoring 21 on the Krugman-Greenspan Business Outlook Index.