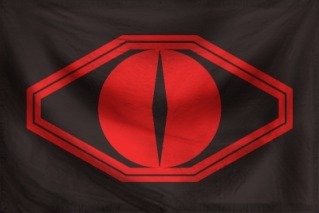 The Infinite Dominion of The Dread Overlord is a gargantuan, efficient nation, ruled by The Dark One with an iron fist, and renowned for its multi-spousal wedding ceremonies, enslaved workforce, and spontaneously combusting cars. The hard-nosed, hard-working, cynical, humorless, devout population of 29.828 billion Uruk-hai are rabid consumers, partly through choice and partly because the government tells them to and dissenters tend to vanish from their homes at night.

The minute, corrupt, pro-business, well-organized government, or what there is of one, prioritizes Law & Order, although Defense and Industry are also considered important, while Social Policy and Environment aren't funded at all. It meets to discuss matters of state in the capital city of New New Barad-dûr. Income tax is unheard of.

The frighteningly efficient Orcish economy, worth a remarkable 7,311 trillion Golden Preciouses a year, is driven almost entirely by the private sector, which is broadly diversified and led by the Automobile Manufacturing industry, with significant contributions from Arms Manufacturing, Uranium Mining, and Information Technology. Average income is an amazing 245,127 Golden Preciouses, but there is a vast disparity between incomes, with the richest 10% of citizens earning 2,263,477 per year while the poor average 2,622, a ratio of 863 to 1.

The clergy of Reformed Melkorism remains a single-sex institution, they say that The Dark One's personal computer is full of naked pictures of the Emperor of Maxtopia, the practice of capital punishment proves divisive, and police officers that upset their bosses get assigned to 24 hour stakeouts of bike sheds. Crime is totally unknown. The Dread Overlord's national animal is the Hobbit-eating Warg, which teeters on the brink of extinction due to widespread deforestation, and its national religion is Reformed Melkorism.

The Dread Overlord is ranked 11,380th in the world and 5th in Middle Earth for Most Corrupt Governments, with 96.46 Kickbacks Per Hour.

Most Recent Government Activity: 78 minutes ago