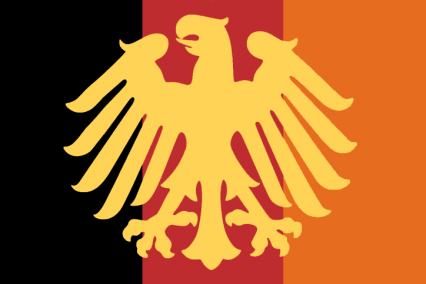 The Felsinsel Anocracy of The Death Syndicate is a massive, orderly nation, ruled by Governor Alberecht Fahrbach with an iron fist, and remarkable for its otherworldly petting zoo, public floggings, and irreverence towards religion. The hard-nosed, hard-working, cynical, humorless population of 3.962 billion Death Syndicate Members are kept under strict control by the oppressive government, which measures its success by the nation's GDP and refers to individual citizens as "human resources."

The medium-sized, corrupt, moralistic, well-organized government is primarily concerned with Defense, although Law & Order, Industry, and Education are also considered important, while Environment and Spirituality receive no funds. It meets to discuss matters of state in the capital city of Cemetery Hill. The average income tax rate is 73.8%.

The frighteningly efficient Death Syndicatean economy, worth a remarkable 1,151 trillion Kroner a year, is broadly diversified and mostly comprised of black market activity, especially in Arms Manufacturing, Information Technology, Uranium Mining, and Retail. Average income is an amazing 290,681 Kroner, and evenly distributed, with the richest citizens earning only 3.4 times as much as the poorest.

You can call your arthritic immigrant neighbour for all your roof-tiling and guttering needs, the revelation that people were sexist in the past is apparently front page news, several citizens have complained about scientists abducting their pets for experimentation, and screams of citizens being "re-educated" echo throughout the rural regions of The Death Syndicate. Crime, especially youth-related, is totally unknown, thanks to a well-funded police force and progressive social policies in education and welfare. The Death Syndicate's national animal is the Plague, which teeters on the brink of extinction due to widespread deforestation, and its national religion is Kriegskult.

The Death Syndicate is ranked 28,317th in the world and 897th in The East Pacific for Most Advanced Public Education, scoring 5,640.6 on the Edu-tellignce® Test Score.

Order of the saint Dumas,