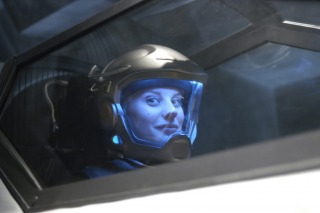 The Dysfunctional Viper Pilots of The Colonial Fleet is a gargantuan, cultured nation, ruled by President Roslin with an even hand, and renowned for its museums and concert halls, otherworldly petting zoo, and frequent executions. The hard-nosed, hard-working, humorless, devout population of 31.551 billion Colonials are either ruled by a sleek, efficient government or a conglomerate of multinational corporations; it's difficult to tell which.

The minute, corrupt government, or what there is of one, juggles the competing demands of Defense, Industry, and Education. It meets to discuss matters of state in the capital city of New Caprica. Income tax is unheard of.

The frighteningly efficient Colonial Fleetian economy, worth an astonishing 19,115 trillion Duckets a year, is driven almost entirely by the private sector, which is broadly diversified and led by the Arms Manufacturing industry, with major contributions from Information Technology, Gambling, and Automobile Manufacturing. Average income is a breathtaking 605,858 Duckets, with the richest citizens earning 6.9 times as much as the poorest.

Neighboring nations are tired of The Colonial Fleet's big fish stories, doughnut-makers claim their products are healthy because they are fortified with vitamins, casino tax breaks are even bigger than their jackpots, and road signs are getting harder to read under layers of knitted woolen cardigans. Crime, especially youth-related, is so common that it is unusual to encounter someone following the law, probably because of the absence of a police force. The Colonial Fleet's national animal is the Toaster, which is also the nation's favorite main course, and its national religion is The Twelve.

The Colonial Fleet is ranked 26,190th in the world and 480th in 10000 Islands for Most World Assembly Endorsements, with zero valid endorsements.