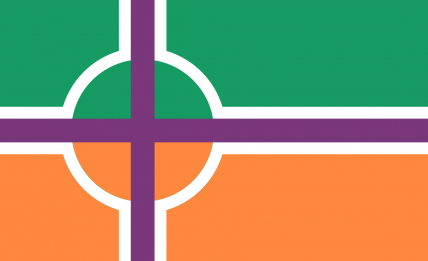 The Catholic State of Eire

The Christian Democrat Republic of The Catholic State of Eire is a colossal, efficient nation, ruled by Taoiseach Pádraig MacCraith with a fair hand, and notable for its daily referendums, zero percent divorce rate, and hatred of cheese. The compassionate, democratic, cheerful, devout population of 9.623 billion Éireannacha enjoy great social freedoms and frequent elections, where the majority of the populace regularly votes to increase its benefits at the expense of various hapless minorities.

The government — a sprawling, bureaucracy-choked, socially-minded, outspoken morass — juggles the competing demands of Welfare, Education, and Industry. It meets to discuss matters of state in the capital city of Baile Átha Cliath. The average income tax rate is 99.1%.

The frighteningly efficient Éireannach economy, worth a remarkable 1,487 trillion Punts a year, is driven entirely by a combination of government and state-owned industry, with private enterprise illegal. The industrial sector, which is highly specialized, is mostly made up of the Tourism industry, with significant contributions from Information Technology, Book Publishing, and Basket Weaving. Average income is an impressive 154,597 Punts, and distributed extremely evenly, with practically no difference between the richest and poorest citizens.

Photographers can be found hiding behind the curtains in Taoiseach Pádraig MacCraith's bedroom, military information leaks are **REDACTED** by **REDACTED** in **REDACTED**, trying to toast marshmallows in an electric fireplace just isn't the same, and teen boys and girls find stick-figure-aided lectures on their comradestruation emphasises socialist unity more than biology. Crime, especially youth-related, is totally unknown, thanks to a very well-funded police force and progressive social policies in education and welfare. The Catholic State of Eire's national animal is the Irish Wolfhound, which frolics freely in the nation's many lush forests, and its national religion is the Catholic Church in Éire.

The Catholic State of Eire is ranked 2,174th in the world and 3rd in Right to Life for Least Corrupt Governments, with 96.13 Percentage Of Bribes Refused.

Most Recent Government Activity: 40 minutes ago