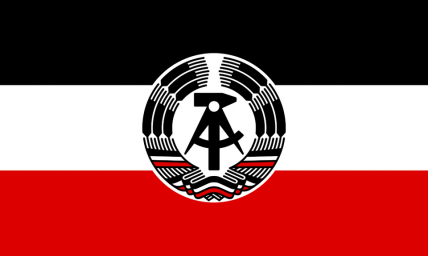 The People's Republic of Teutonic Kaiserreich is a colossal, cultured nation, ruled by Volkskaiser Werner I with an even hand, and notable for its museums and concert halls, frequent executions, and irreverence towards religion. The compassionate, cheerful population of 6.775 billion Kaiserians are fiercely patriotic and enjoy great social equality; they tend to view other, more capitalist countries as somewhat immoral and corrupt.

The enormous, socially-minded government juggles the competing demands of Education, Administration, and Healthcare. It meets to discuss matters of state in the capital city of Preussen. The average income tax rate is 97.6%.

The frighteningly efficient Kaiserian economy, worth a remarkable 1,143 trillion volksmarks a year, is driven entirely by a combination of government and state-owned industry, with private enterprise illegal. The industrial sector, which is quite specialized, is led by the Information Technology industry, with significant contributions from Book Publishing, Tourism, and Arms Manufacturing. Average income is an impressive 168,797 volksmarks, and distributed extremely evenly, with practically no difference between the richest and poorest citizens.

Tax-payers are funding ever more extravagant movie projects, the new iVote app allows representatives to vote on legislation by launching ill-tempered birds and matching candies, politicians tend to jump ship to whichever party is currently leading in the polls, and political gridlock ensues as even the most innocuous legislation is vetoed by the Supreme Court for potential civil rights violations. Crime, especially youth-related, is totally unknown, thanks to a well-funded police force and progressive social policies in education and welfare. Teutonic Kaiserreich's national animal is the prussian crow, which soars majestically through the nation's famously clear skies.

Teutonic Kaiserreich is ranked 3,083rd in the world and 62nd in Europe for Healthiest Citizens, with 24.07 bananas ingested per day.