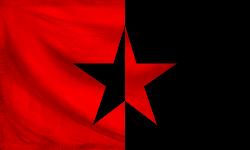 The Rogue Nation of Tarockanien is a gargantuan, genial nation, ruled by Sküs with a fair hand, and remarkable for its otherworldly petting zoo, irreverence towards religion, and absence of drug laws. The compassionate, democratic population of 18.14 billion Tarockpartie love a good election, and the government gives them plenty of them. Universities tend to be full of students debating the merits of various civil and political rights, while businesses are tightly regulated and the wealthy viewed with suspicion.

The enormous, socially-minded government prioritizes Education, although Environment, Healthcare, and Welfare are also considered important, while Spirituality and Defense aren't funded at all. It meets to discuss matters of state in the capital city of Tschocherl. The average income tax rate is 98.1%.

The frighteningly efficient ka Kiebitz economy, worth a remarkable 2,608 trillion Piatniks a year, is driven entirely by a combination of government and state-owned industry, with private enterprise illegal. The industrial sector, which is highly specialized, is mostly made up of the Book Publishing industry, with significant contributions from Tourism, Information Technology, and Basket Weaving. Average income is an impressive 143,772 Piatniks, and distributed extremely evenly, with little difference between the richest and poorest citizens.

The Snapgram channel "Embarrassing Baby Sküs Pics" has made Sküs's mom a celebrity, studio executives abandon tragic stories of star-crossed lovers because "it's been done", the number of deaths due to poor fungus identification is mushrooming, and unpackaged foodstuffs rot on store shelves. Crime is totally unknown, thanks to a capable police force and progressive social policies in education and welfare. Tarockanien's national animal is the Pagat, which frolics freely in the nation's many lush forests.

Tarockanien is ranked 222,864th in the world and 2nd in Greifenreservat for Largest Agricultural Sector, scoring -15.73 on the Mu-Bah-Daggs Productivity Index.