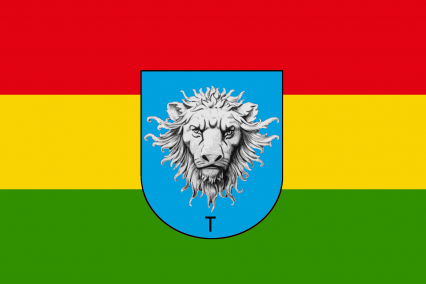 The Disputed Territories of Taithirchim is a gargantuan, cultured nation, ruled by President Basilio Aturi with an iron fist, and renowned for its barren, inhospitable landscape, compulsory military service, and strictly enforced bedtime. The hard-nosed, hard-working, cynical, humorless population of 13.184 billion Taithirchimians are kept under strict control by the oppressive government, which measures its success by the nation's GDP and refers to individual citizens as "human resources."

The enormous, corrupt government juggles the competing demands of Defense, Education, and Law & Order. The average income tax rate is 69.1%.

The all-consuming Taithirchimian economy, worth a remarkable 1,075 trillion Kjarrors a year, is quite specialized and led by the Uranium Mining industry, with significant contributions from Basket Weaving, Arms Manufacturing, and Furniture Restoration. Black market activity is rampant. Average income is 81,560 Kjarrors, with the richest citizens earning 5.3 times as much as the poorest.

Gangs have taken to secret handshakes after tattoos were banned, bereaved families are assigned a new housemate the day after the funeral, gossip magazines have pictures of President Basilio Aturi sunbathing on the beach with political rivals, and female brains are believed to heat up dangerously when 'overclocked'. Crime, especially youth-related, is totally unknown, thanks to the all-pervasive police force and progressive social policies in education and welfare. Taithirchim's national animal is the giant squid, which teeters on the brink of extinction due to heavy metals seepage into national waterways, and its national religion is protestantism.

Taithirchim is ranked 19,384th in the world and 837th in Lazarus for Most Subsidized Industry, scoring 5,662.29 on the Gilded Widget Scale.