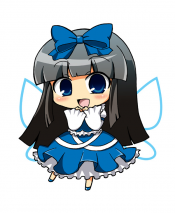 The Active Fluttery Faeries of StarSapphire is a colossal, socially progressive nation, ruled by Star Saphire with an iron fist, and renowned for its pith helmet sales and suspicion of poets. The hard-nosed, hard-working, cynical population of 7.674 billion StarSapphireans are proud of their wide-ranging civil freedoms, and those who aren't tend to be dragged off the streets by men in dark suits and hustled into cars with tinted windows.

The medium-sized, liberal government juggles the competing demands of Administration, Defense, and Public Transport. It meets to discuss matters of state in the capital city of Neo Gensokyo. The average income tax rate is 23.2%.

The StarSapphirean economy, worth 497 trillion Monies a year, is fairly diversified and led by the Tourism industry, with major contributions from Gambling, Arms Manufacturing, and Retail. Average income is 64,834 Monies, and evenly distributed, with the richest citizens earning only 4.1 times as much as the poorest.

Edutainment video games are taking StarSapphire's students to the next level, in life full of care there is no time to stop and stare, young children are regularly seen wagering pocket money at blackjack tables, and Star Saphire has just been declared ruler of StarSapphire in an international press conference. Crime is moderate, with the police force struggling against a lack of funding and a high mortality rate. StarSapphire's national animal is the Lion, which frolics freely in the nation's many lush forests.

StarSapphire is ranked 103,020th in the world and 9th in Libertatem for Largest Welfare Programs, scoring 995.37 on the Safety Net Mesh Density Rating.