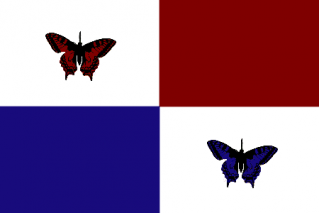 The Queendom of Sprose is a gargantuan, efficient nation, ruled by Princess Cassandra with an even hand, and renowned for its smutty television, ban on automobiles, and absence of drug laws. The compassionate, cheerful population of 14.498 billion Spirosens enjoy extensive civil rights and enjoy a level of social equality free from the usual accompanying government corruption.

The large, corrupt, liberal, socially-minded government juggles the competing demands of Education, Environment, and Welfare. It meets to discuss matters of state in the capital city of Cyristië. The average income tax rate is 99.1%.

The frighteningly efficient Spirosen economy, worth a remarkable 3,135 trillion Diamont-Nails a year, is driven almost entirely by government activity, with private enterprise illegal. However, for those in the know, there is an enormous, deeply entrenched, broadly diversified black market in Information Technology. The private sector mostly consists of enterprising ten-year-olds selling lemonade on the sidewalk, but the government is looking at stamping this out. Average income is an amazing 216,290 Diamont-Nails, and evenly distributed, with the richest citizens earning only 2.0 times as much as the poorest.

Kids are taught in schools to argue with their parents, protecting the land is holey work, mantis shrimp studies is academia's fastest-growing field, and Sprose is renowned for its lax gun laws. Crime is totally unknown. Sprose's national animal is the Huge Treasure-Eating Snail, which frolics freely in the nation's many lush forests, and its national religion is Ignorance.