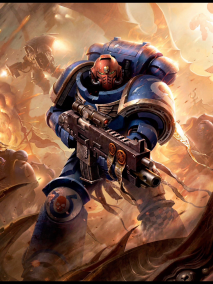 The Empire of Space Marine 15 is a massive, orderly nation, renowned for its avowedly heterosexual populace, suspicion of poets, and stringent health and safety legislation. The hard-nosed, cynical population of 3.744 billion Space Marine 15ians are ruled without fear or favor by a psychotic dictator, who outlaws just about everything and refers to the populace as "my little playthings."

The large, moralistic, socially-minded, well-organized government juggles the competing demands of Defense, Law & Order, and Administration. The average income tax rate is 56.0%, and even higher for the wealthy.

The sizeable but stagnant Space Marine 15ian economy, worth 38.7 trillion Throne Gelts a year, is driven entirely by a combination of government and state-owned industry, with private enterprise illegal. However, for those in the know, there is a slick, highly efficient, quite specialized black market in Trout Farming, Uranium Mining, Information Technology, and Furniture Restoration. The private sector mostly consists of enterprising ten-year-olds selling lemonade on the sidewalk, but the government is looking at stamping this out. Average income is 10,340 Throne Gelts, and distributed extremely evenly, with practically no difference between the richest and poorest citizens.

The military patrols the streets in search of possible secessionists, newlywed misogynists complain about their wives keeping their maiden names, Leader's new door-knocking campaign has the sweet taste of success, and park rangers perform full-body searches on suspected fungus smugglers. Crime is totally unknown, thanks to a very well-funded police force and progressive social policies in education and welfare. Space Marine 15's national animal is the Aquila, which can occasionally be seen sifting through garbage in the nation's cities.

Space Marine 15 is ranked 58,043rd in the world and 648th in Artificial Solar System for Most Avoided, scoring 5.05 on the Kardashian Reflex Score.