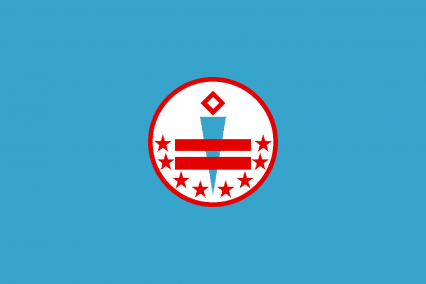 The Democratic People's Union of South Miruva is a gargantuan, genial nation, ruled by Chief Executive Moski Emers with a fair hand, and notable for its rampant corporate plagiarism, irreverence towards religion, and stringent health and safety legislation. The compassionate, democratic, cheerful population of 12.202 billion South Miruvians are free to do what they want with their own bodies, and vote for whomever they like in elections; if they go into business, however, they are regulated to within an inch of their lives.

The enormous, liberal, socially-minded government juggles the competing demands of Education, Environment, and Healthcare. It meets to discuss matters of state in the capital city of Lutternas. The average income tax rate is 98.7%.

The frighteningly efficient South Miruvian economy, worth a remarkable 2,127 trillion Miruvian Dollars a year, is driven entirely by a combination of government and state-owned industry, with private enterprise illegal. The industrial sector, which is highly specialized, is mostly made up of the Information Technology industry, with significant contributions from Book Publishing and Tourism. Average income is an impressive 174,321 Miruvian Dollars, and distributed extremely evenly, with practically no difference between the richest and poorest citizens.

Residential tower blocks are surrounded by warrens of concrete tunnels, traffic cops spend most of their work-hours calculating citizens' monthly income, the dartboard at the South Miruvian Cancer Research Charity bears a picture of Chief Executive Moski Emers's face, and the Treasury has been accused of flushing money down the toilet. Crime is totally unknown. South Miruva's national animal is the Beaver, which frolics freely in the nation's many lush forests, and its national religion is Posadism-Hoxhaism.

South Miruva is ranked 255,910th in the world and 484th in The Leftist Assembly for Largest Cheese Export Sector, scoring -8 on the Mozzarella Productivity Index.