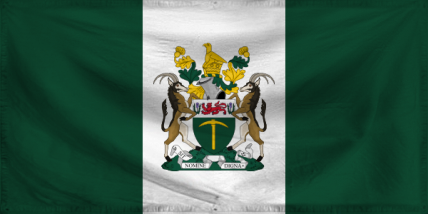 The Colony of South-Central Rhodesia is a colossal, cultured nation, ruled by The Rt Hon Luca - Conservative Party with an even hand, and notable for its museums and concert halls, frequent executions, and absence of drug laws. The hard-nosed, hard-working, cheerful, devout population of 7.882 billion South-Central Rhodesians are either ruled by a sleek, efficient government or a conglomerate of multinational corporations; it's difficult to tell which.

The relatively small, corrupt government juggles the competing demands of Defense, Industry, and Education. It meets to discuss matters of state in the capital city of Salisbury. The average income tax rate is 33.1%.

The frighteningly efficient South-Central Rhodesian economy, worth a remarkable 2,042 trillion Rhodesian Pounds a year, is broadly diversified and led by the Retail industry, with major contributions from Arms Manufacturing, Information Technology, and Book Publishing. Black market activity is rampant. Average income is an amazing 259,139 Rhodesian Pounds, and evenly distributed, with the richest citizens earning only 3.2 times as much as the poorest.

Citizens are permitted to carry concealed handguns, the traditional Violetist dish of stuffed sheep's head is served with an intense look of shock upon its face, raver DJ XStacy holds multiple medical degrees in chillaxing, and twins move across the country to avoid being accused of the other's crimes. Crime, especially youth-related, is totally unknown. South-Central Rhodesia's national animal is the Foxy Fox, which is also the nation's favorite main course, and its national religion is Anglican - Church of England.

South-Central Rhodesia is ranked 15,127th in the world and 26th in Lands End for Largest Pizza Delivery Sector, scoring 5,334.95 on the Pepperoni Propulsion Productivity Index.

United Peoples of Flowers, and