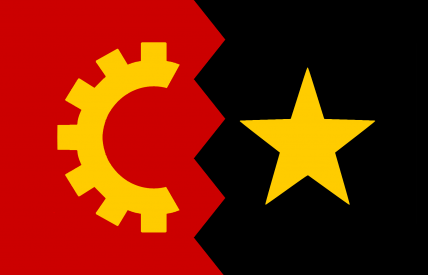 The People's Republic of Sodoran Alesia is a colossal, environmentally stunning nation, ruled by Kirk Socramander with a fair hand, and renowned for its multi-spousal wedding ceremonies, rampant corporate plagiarism, and irreverence towards religion. The compassionate, democratic, cheerful population of 8.049 billion Sodoran Alesians are free to do what they want with their own bodies, and vote for whomever they like in elections; if they go into business, however, they are regulated to within an inch of their lives.

The large, liberal, outspoken government juggles the competing demands of Education, Administration, and Environment. It meets to discuss matters of state in the capital city of Coastal Tiber. The average income tax rate is 99.3%.

The frighteningly efficient Sodoran Alesian economy, worth a remarkable 1,815 trillion leutesmarks a year, is driven entirely by a combination of government and state-owned industry, with private enterprise illegal. The industrial sector, which is quite specialized, is led by the Information Technology industry, with significant contributions from Tourism, Book Publishing, and Trout Farming. Average income is an amazing 225,531 leutesmarks, and distributed extremely evenly, with little difference between the richest and poorest citizens.

Edutainment video games are taking Sodoran Alesia's students to the next level, the national anthem is a rather effective sleeping aid, an aboriginal talking stick is used for leaders' debates at election time, and all recreational drugs are legal. Crime is totally unknown. Sodoran Alesia's national animal is the Haast's Eagle, which soars majestically through the nation's famously clear skies.

Sodoran Alesia is ranked 322nd in the world and 3rd in The Communist Bloc for Most Valuable International Artwork, with 1,803.26 Bank.