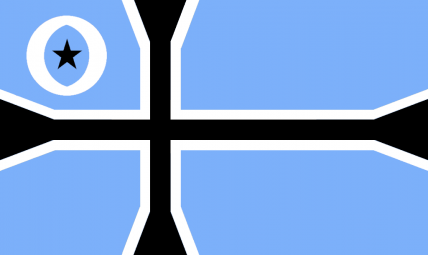 The Shadow of Sma Cyrillic is a massive, orderly nation, ruled by Lord Matthias III with an iron fist, and notable for its frequent executions, restrictive gun laws, and suspicion of poets. The hard-nosed, hard-working, cynical, devout population of 4.084 billion Cyrillians are kept under strict control by the oppressive government, which measures its success by the nation's GDP and refers to individual citizens as "human resources."

The medium-sized, corrupt, moralistic, well-organized government prioritizes Defense, although Law & Order, Education, and Administration are also considered important, while International Aid and Welfare aren't funded at all. It meets to discuss matters of state in the capital city of New Cyrillica. The average income tax rate is 28.2%, but much higher for the wealthy.

The strong Sma Cyrillician economy, worth 309 trillion Lire a year, is broadly diversified and led by the Arms Manufacturing industry, with significant contributions from Information Technology, Door-to-door Insurance Sales, and Uranium Mining. State-owned companies are reasonably common. Average income is 75,868 Lire, and evenly distributed, with the richest citizens earning only 2.3 times as much as the poorest.

The airforce has intensified its bombings of hospitals and schools in Brasilistan, 'Shoot the Villager' has become a popular pastime in the nation's armed forces, the entire nation of Brasilistan has been designated as a nuclear testing site, and the nation is weighing the price of victory following a nuclear strike. Crime, especially youth-related, is totally unknown, thanks to a well-funded police force and progressive social policies in education and welfare. Sma Cyrillic's national animal is the Corgi and its national religion is Church of Xaethos.

Sma Cyrillic is ranked 236,590th in the world and 302nd in Thaecia for Most Rebellious Youth, scoring -12 on the Stark-Dean Displacement Index.