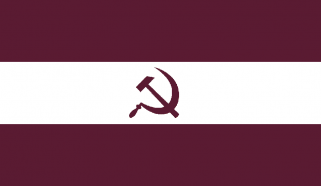 The Soviet Republic of Slavianki is a colossal, environmentally stunning nation, remarkable for its national health service, multi-spousal wedding ceremonies, and devotion to social welfare. The compassionate, democratic population of 9.721 billion Slavianskiys are free to do what they want with their own bodies, and vote for whomever they like in elections; if they go into business, however, they are regulated to within an inch of their lives.

The government — a sprawling, bureaucracy-choked, socially-minded, outspoken morass — juggles the competing demands of Education, Environment, and Healthcare. It meets to discuss matters of state in the capital city of Arkhangelsk. The average income tax rate is 91.3%, and even higher for the wealthy.

The very strong Slavianskiy economy, worth 739 trillion rubles a year, is driven entirely by a combination of government and state-owned industry, with private enterprise illegal. The industrial sector, which is extremely specialized, is mostly made up of the Book Publishing industry, with significant contributions from Tourism. Average income is 76,094 rubles, and distributed extremely evenly, with practically no difference between the richest and poorest citizens.

Leader's iHouse is so intelligent that it manages its own social media accounts, party leaders rely on horoscopes to create "ticket balance", Eau de Trashcan has become a wildly popular perfume, and children have taken to using semaphore in light of the recent mobile phone ban. Crime is totally unknown, thanks to a capable police force and progressive social policies in education and welfare. Slavianki's national animal is the bear, which frolics freely in the nation's many lush forests.

Slavianki is ranked 8,824th in the world and 235th in the Rejected Realms for Most Advanced Public Education, scoring 11,460.07 on the Edu-tellignce® Test Score.