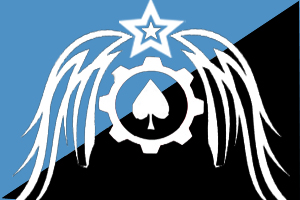 The Free Raider Commonwealth of Sky Reavers is a massive, cultured nation, ruled by Overboss Liam Navarro with a fair hand, and renowned for its rampant corporate plagiarism, irreverence towards religion, and punitive income tax rates. The compassionate, hard-working, democratic, cheerful population of 3.752 billion Sky Reavers live in a state of perpetual fear, as a complete breakdown of social order has led to the rise of order through biker gangs.

The medium-sized, corrupt, liberal, outspoken government juggles the competing demands of Education, Industry, and Defense. It meets to discuss matters of state in the capital city of Junction City. The average income tax rate is 68.1%, and even higher for the wealthy.

The frighteningly efficient Sky Reaver economy, worth 807 trillion kronor a year, is broadly diversified and led by the Tourism industry, with major contributions from Information Technology, Retail, and Arms Manufacturing. Black market activity is rampant. Average income is an amazing 215,318 kronor, and evenly distributed, with the richest citizens earning only 2.2 times as much as the poorest.

Consumption of cat memes has skyrocketed, celebrities sit helplessly as they are labeled "pompous womples" by Overboss Liam Navarro, a violent scene on television results in mass mobilization of the National Guard, and Overboss Liam Navarro's family members carry literal get-out-of-jail-free cards. Crime, especially youth-related, is moderate, perhaps because of the country's complete lack of prisons. Sky Reavers's national animal is the falcon, which is also the nation's favorite main course.

Sky Reavers is ranked 84,987th in the world and 5th in The United Islands of the Atlantic for Largest Automobile Manufacturing Sector, scoring 2,624.08 on the Henry Ford Productivity Index.