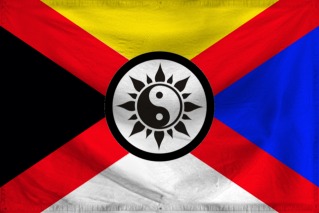 The Confederate Empire of Sheng China is a gargantuan, orderly nation, ruled by Grand Empress Sheng Sun Xiang with an iron fist, and renowned for its keen interest in outer space, digital currency, and restrictive gun laws. The compassionate, cynical, humorless population of 15.757 billion Chinese are ruled by a mostly-benevolent dictator, who grants the populace the freedom to live their own lives but watches carefully for anyone to slip up.

The relatively small, corrupt, well-organized government juggles the competing demands of Education, Industry, and Law & Order. It meets to discuss matters of state in the capital city of Yong'an. The average income tax rate is 68.8%, and even higher for the wealthy.

The frighteningly efficient Sheng Chinese economy, worth a remarkable 5,811 trillion Wu Zhus a year, is broadly diversified and led by the Tourism industry, with major contributions from Information Technology, Book Publishing, and Arms Manufacturing. Black market activity is rampant. State-owned companies are reasonably common. Average income is an amazing 368,838 Wu Zhus, and evenly distributed, with the richest citizens earning only 2.1 times as much as the poorest.

Battlefield gains are quickly lost when enemies don't respect a time-out, 4-year-olds are often found reminiscing about the 'good old days', people often get liposuction to reduce their air fares, and kids these days know how to throw a proper punch. Crime, especially youth-related, is totally unknown, thanks to a capable police force and progressive social policies in education and welfare. Sheng China's national animal is the Celestial Dragon, which soars majestically through the nation's famously clear skies, and its national religion is Neo-Taoism.

Sheng China is ranked 203,236th in the world and 20th in Asiana for Safest, scoring 6.34 on the Bubble-Rapp Safety Rating.

The Democratic States of Ablya, and