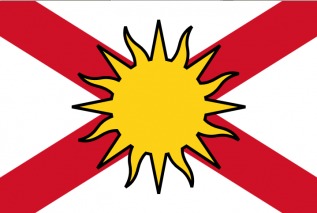 The Nakedness of
Sheelberite
Moralistic Democracy
It's getting hot in here, so take off all your clothes.
Walter J Peabody III
Influence
Sprat
Region
The East Pacific
Civil Rights
Some
Economy
Frightening
Political Freedom
Average

The Nakedness of Sheelberite is a massive, efficient nation, ruled by Walter J Peabody III with an even hand, and remarkable for its national health service, state-planned economy, and keen interest in outer space. The hard-nosed, humorless population of 4.448 billion Sheelberites are highly moralistic and fiercely conservative, in the sense that they tend to believe most things should be outlawed. People who have good jobs and work quietly at them are lauded; others are viewed with suspicion.

The medium-sized, corrupt government juggles the competing demands of Education, Administration, and Law & Order. It meets to discuss matters of state in the capital city of Bloodyoath. The average income tax rate is 57.1%, and even higher for the wealthy.

The frighteningly efficient Sheelberitean economy, worth 675 trillion dollarydoos a year, is driven entirely by a combination of government and state-owned industry, with private enterprise illegal. However, for those in the know, there is an enormous, deeply entrenched, quite specialized black market in Tourism, Basket Weaving, and Book Publishing. The private sector mostly consists of enterprising ten-year-olds selling lemonade on the sidewalk, but the government is looking at stamping this out. Average income is an impressive 151,933 dollarydoos, and evenly distributed, with the richest citizens earning only 2.0 times as much as the poorest.

Government workers are regularly taken hostage by protesters, dinosaur breeders have a yabba-dabba-doo gay old time in Sheelberite, family isn't who you're born with but who you abandon in foreign countries, and the Sheelberitean Intelligence Agency relies on internet search engines to know what is happening overseas. Crime, especially youth-related, is totally unknown, thanks to a very well-funded police force and progressive social policies in education and welfare. Sheelberite's national animal is the Flamin' Codswallop, which frolics freely in the nation's sparkling oceans, and its national religion is Pantheism.

Sheelberite is ranked 1,339th in the world and 49th in The East Pacific for Largest Basket Weaving Sector, scoring 10,095.56 on the Hickory Productivity Index.