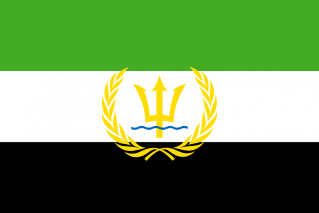 The Grand Jurisprudence of Shamian is a colossal, socially progressive nation, ruled by Tarrin Kael with a fair hand, and notable for its rum-swilling pirates, free-roaming dinosaurs, and punitive income tax rates. The compassionate, democratic, cheerful population of 7.518 billion Shamanians are free to do what they want with their own bodies, and vote for whomever they like in elections; if they go into business, however, they are regulated to within an inch of their lives.

The large, liberal, socially-minded, outspoken government prioritizes Education, although Industry, Environment, and Administration are also considered important, while Defense and Spirituality are ignored. It meets to discuss matters of state in the capital city of Ankh-Morpork. The income tax rate is 100%.

The frighteningly efficient Shamianian economy, worth a remarkable 2,268 trillion Taols a year, is driven entirely by a combination of government and state-owned industry, with private enterprise illegal. The industrial sector, which is quite specialized, is led by the Information Technology industry, with significant contributions from Tourism, Book Publishing, and Soda Sales. Average income is an amazing 301,795 Taols, and distributed extremely evenly, with practically no difference between the richest and poorest citizens.

Travellers are often forcibly evicted by torch-bearing mobs, Shamianian tourists are encouraged to hand out spare condoms to locals while on vacation, pausing for applause during a speech is seen as a form of censorship, and the seats at the back of the parliament are reserved for indigenous ministers. Crime is totally unknown. Shamian's national animal is the Otter, which frolics freely in the nation's sparkling oceans, and its national religion is Jainism.

Shamian is ranked 1,924th in the world and 7th in The Communist Bloc for Rudest Citizens, with 228.12 Insults Per Minute.

Most Serene Republic of Erreara,

A Post-Apocalyptic Wasteland, and 127 others.

Free Transhuman Governance of the People,

The Socialist Republic of Dragons,