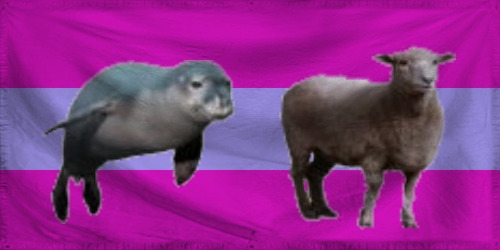 The Empire of Seals and Sheep is a huge, safe nation, notable for its state-planned economy and punitive income tax rates. The quiet, industrious population of 520 million Seals and Sheepians are prohibited from doing almost everything except voting, which they do timidly and conservatively.

The large, moralistic, socially-minded government juggles the competing demands of Welfare, Defense, and Law & Order. The average income tax rate is 51.6%, and even higher for the wealthy.

The sizeable but underdeveloped Seals and Sheepian economy, worth 16.8 trillion kronor a year, is driven entirely by a combination of government and state-owned industry, with private enterprise illegal. The industrial sector, which is fairly diversified, is led by the Basket Weaving industry, with major contributions from Door-to-door Insurance Sales, Retail, and Cheese Exports. Average income is 32,292 kronor, and distributed extremely evenly, with little difference between the richest and poorest citizens.

Crime is totally unknown, thanks to a well-funded police force and progressive social policies in education and welfare. Seals and Sheep's national animal is the sealsheep, which frolics freely in the nation's sparkling oceans.

Seals and Sheep is ranked 108,710th in the world and 2nd in United Countries And Nations for Largest Basket Weaving Sector, scoring 2,734.73 on the Hickory Productivity Index.