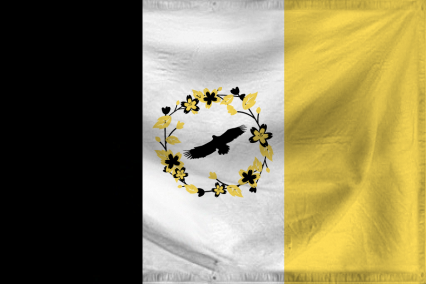 The United Republic of Sarenium is a gargantuan, cultured nation, ruled by Camilla Parker with a fair hand, and renowned for its complete lack of prisons, compulsory military service, and infamous sell-swords. The hard-nosed, democratic, humorless population of 15.012 billion Sarens hold their civil and political rights very dear, although the wealthy and those in business tend to be viewed with suspicion.

The large government juggles the competing demands of Defense, Education, and Industry. It meets to discuss matters of state in the capital city of Seira. The average income tax rate is 96.9%.

The frighteningly efficient Saren economy, worth a remarkable 3,014 trillion Dollars a year, is quite specialized and led by the Tourism industry, with major contributions from Information Technology and Arms Manufacturing. State-owned companies are common. Average income is an amazing 200,825 Dollars, and distributed extremely evenly, with little difference between the richest and poorest citizens.

Interest in globalism never flags, there's nothing more gay than bleeding for your nation, the nation sends criminals home to think about what they did, and weird kids who eat bugs are breaking the law. Crime is totally unknown, thanks to a capable police force and progressive social policies in education and welfare. Sarenium's national animal is the Phoenix, which soars majestically through the nation's famously clear skies.

Sarenium is ranked 5,955th in the world and 2nd in POLATION for Smartest Citizens, with 119.25 quips per hour.