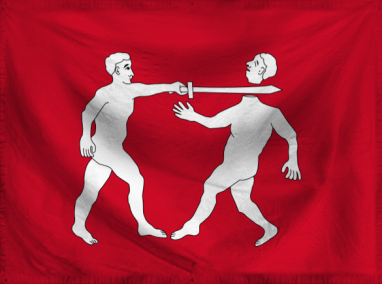 The Democratic People's Republic of Santa Dystopia is a massive, efficient nation, ruled by Kim Yo-jong with an iron fist, and notable for its multi-spousal wedding ceremonies, digital currency, and complete lack of prisons. The hard-nosed, hard-working, cynical, humorless population of 4.431 billion Dystopianis are ruled by a mostly-benevolent dictator, who grants the populace the freedom to live their own lives but watches carefully for anyone to slip up.

The relatively small, corrupt government prioritizes Defense, although Industry, Education, and Law & Order are also considered important, while Environment and Social Policy aren't funded at all. It meets to discuss matters of state in the capital city of Rason. The average income tax rate is 62.5%, and even higher for the wealthy.

The frighteningly efficient Dystopiani economy, worth a remarkable 1,025 trillion shillings a year, is broadly diversified and led by the Arms Manufacturing industry, with significant contributions from Retail, Information Technology, and Beef-Based Agriculture. Black market activity is rampant. Average income is an amazing 231,432 shillings, and evenly distributed, with the richest citizens earning only 2.2 times as much as the poorest.

Teenagers stay out into the wee hours of the morning "stargazing", asking 'a penny for your thoughts?' draws law enforcement response, even God cannot save you in Santa Dystopia, and historical commemorations regularly devolve into militaristic jingoism. Crime, especially youth-related, is totally unknown, thanks to a capable police force and progressive social policies in education and welfare. Santa Dystopia's national animal is the lizard, which is also the nation's favorite main course.

Santa Dystopia is ranked 84,792nd in the world and 2,811th in Balder for Most Income Equality, scoring 45.14 on the Marx-Engels Emancipation Scale.