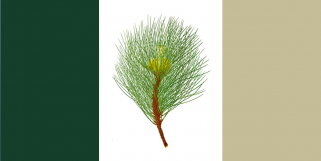 The Homestead Union of Sandpine Republic is a gargantuan, environmentally stunning nation, remarkable for its public floggings and suspicion of poets. The hard-nosed population of 14.656 billion Sandpine Republicans are fiercely patriotic and enjoy great social equality; they tend to view other, more capitalist countries as somewhat immoral and corrupt.

The large, socially-minded government prioritizes Spirituality, although Law & Order, Education, and Industry are also considered important. It meets to discuss matters of state in the capital city of Pond City. The average income tax rate is 37.7%, but much higher for the wealthy.

The large but inefficient Sandpine economy, worth 500 trillion florins a year, is quite specialized and led by the Gambling industry, with major contributions from Cheese Exports, Furniture Restoration, and Woodchip Exports. Black market activity is notable. State-owned companies are common. Average income is 34,143 florins, and distributed extremely evenly, with little difference between the richest and poorest citizens.

Anti-government web sites are springing up, the public health bureaucracy is wrapped in miles of red tape, no personal detail is too tiny for the suede-denim census police, and 'Police Academy 36' and 'Sharknados On A Plane' are vying for top spot at the box-office. Crime, especially youth-related, is almost non-existent, thanks to a capable police force and progressive social policies in education and welfare. Sandpine Republic's national animal is the sand pine, which is also the nation's favorite main course.

Sandpine Republic is ranked 168,030th in the world and 24th in Warzone Sandbox for Largest Basket Weaving Sector, scoring zero on the Hickory Productivity Index.