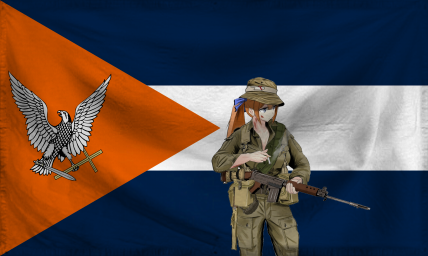 The Kingdom of Salcanceacy is a colossal, environmentally stunning nation, ruled by King Oliver Formby with an iron fist, and notable for its enslaved workforce, punitive income tax rates, and devotion to social welfare. The hard-nosed, hard-working, cynical, humorless population of 7.897 billion Salcanceacyians are ruled by a mostly-benevolent dictator, who grants the populace the freedom to live their own lives but watches carefully for anyone to slip up.

The medium-sized, corrupt, well-organized government prioritizes Defense, although Education, Industry, and Law & Order are also considered important, while Spirituality and International Aid receive no funds. It meets to discuss matters of state in the capital city of Salcancisco. The average income tax rate is 90.1%, and even higher for the wealthy.

The frighteningly efficient Salcanceacyian economy, worth a remarkable 2,086 trillion Koins a year, is broadly diversified and led by the Arms Manufacturing industry, with major contributions from Information Technology, Book Publishing, and Retail. Black market activity is rampant. Average income is an amazing 264,236 Koins, and evenly distributed, with the richest citizens earning only 3.0 times as much as the poorest.

The monarch frequently needs protecting from misfiring protection, prime commercial land is being swamped with archaeological teams, adult unemployment is rising as available jobs are filled by young children, and Salcanceacyians believe manners maketh the leader. Crime, especially youth-related, is totally unknown, thanks to a capable police force and progressive social policies in education and welfare. Salcanceacy's national animal is the White Martial Eagle, which is also the nation's favorite main course, and its national religion is Calvinism.

Most Recent Government Activity: 33 minutes ago