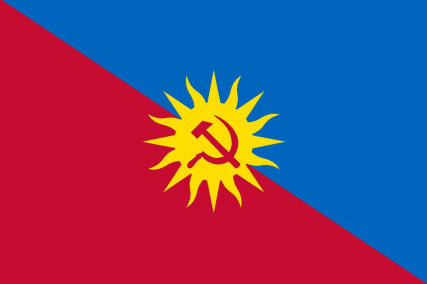 The Socialist Republic of Rothnia is a massive, genial nation, ruled by Comrade Bulin with an even hand, and renowned for its digital currency, ubiquitous missile silos, and sprawling nuclear power plants. The compassionate, democratic population of 2.386 billion Rothnians enjoy extensive civil rights and enjoy a level of social equality free from the usual accompanying government corruption.

The enormous, socially-minded government juggles the competing demands of Education, Administration, and Healthcare. It meets to discuss matters of state in the capital city of Bulingrad. The average income tax rate is 93.3%, and even higher for the wealthy.

The frighteningly efficient Rothnian economy, worth 307 trillion Rubles a year, is driven entirely by a combination of government and state-owned industry, with private enterprise illegal. The industrial sector, which is quite specialized, is mostly made up of the Information Technology industry, with significant contributions from Arms Manufacturing, Beef-Based Agriculture, and Book Publishing. Average income is an impressive 128,921 Rubles, and distributed extremely evenly, with little difference between the richest and poorest citizens.

There has been a series of riots between local cannibals and health food advocates, the family summer vacation has become a thing of the past following the introduction of the year-round school year, any body part that can be cut off a person is no longer considered to be their property, and all new "spies" are fifteen-year-old acne-ridden kids on computers. Crime, especially youth-related, is totally unknown, thanks to a well-funded police force and progressive social policies in education and welfare. Rothnia's national animal is the Bear, which is also the nation's favorite main course, and its national religion is Atheism.

Rothnia is ranked 6,573rd in the world and 198th in The Communist Bloc for Largest Welfare Programs, scoring 5,961.57 on the Safety Net Mesh Density Rating.

Most Recent Government Activity: 76 minutes ago