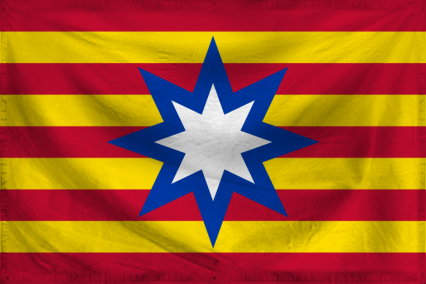 The Bannorn of Ronso is a massive, socially progressive nation, ruled by Bann Argai vos Duranos with an even hand, and renowned for its barren, inhospitable landscape, zero percent divorce rate, and compulsory military service. The hard-working, devout population of 1.059 billion Ronsoans have some civil rights, but not too many, enjoy the freedom to spend their money however they like, to a point, and take part in free and open elections, although not too often.

The tiny government juggles the competing demands of Education, Defense, and Spirituality. It meets to discuss matters of state in the capital city of Kimari. Citizens pay a flat income tax of 8.5%.

The strong Ronsoan economy, worth 82.4 trillion kamas a year, is broadly diversified and led by the Arms Manufacturing industry, with major contributions from Book Publishing, Basket Weaving, and Door-to-door Insurance Sales. Average income is 77,764 kamas, with the richest citizens earning 7.1 times as much as the poorest.

Many whiskies taste suspiciously like automobile radiators, city rooftops are pockmarked with the shattered remains of high velocity delivery drones, the nation solves other countries' human rights problems with a generous dose of violence, and bored politicians often entertain themselves with games of Simon during important votes. Crime, especially youth-related, is totally unknown. Ronso's national animal is the rhinoceros, which teeters on the brink of extinction due to widespread deforestation.

Ronso is ranked 212,298th in the world and 7th in Order of the Southern North for Most Secular, with 12.75 Atheism Rate.