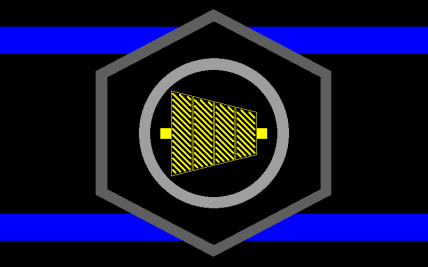 The City-State of Rho Ophiuchi is a massive, orderly nation, renowned for its multi-spousal wedding ceremonies, keen interest in outer space, and national health service. The hard-nosed, hard-working, cynical population of 2.799 billion Rho Ophiuchians enjoy great individual freedoms in everything except elections, which, where they exist at all, are populist shams for a dictatorship government that has no intention of ever giving up power.

The tiny, corrupt, liberal, pro-business, well-organized government is dominated by the Department of Industry, although Education and Healthcare are also considered important, while Environment and Law & Order receive no funds. Income tax is unheard of.

The frighteningly efficient Rho Ophiuchian economy, worth 819 trillion Kilograms of Iron a year, is driven almost entirely by the private sector, which is broadly diversified and led by the Information Technology industry, with major contributions from Retail, Arms Manufacturing, and Gambling. Average income is an amazing 292,865 Kilograms of Iron, but there is a vast disparity between incomes, with the richest 10% of citizens earning 1,943,723 per year while the poor average 16,901, a ratio of 115 to 1.

Corporations claim the third ounce of any metal traded in a wicker-cone on the Sunday of a full moon as a charitable expense, reflection is vital for badly behaved politicians, biker gangs and fashionistas are converting to Violetism en masse, and paranoid museum guards keep a lookout for any animated displays attempting to escape the premises after dark. Crime, especially youth-related, is all-pervasive, probably because of the absence of a police force. Rho Ophiuchi's national animal is the Rotifer, which is also the nation's favorite main course.

Rho Ophiuchi is ranked 767th in the world and 9th in the Pacific for Largest Automobile Manufacturing Sector, scoring 16,133.21 on the Henry Ford Productivity Index.