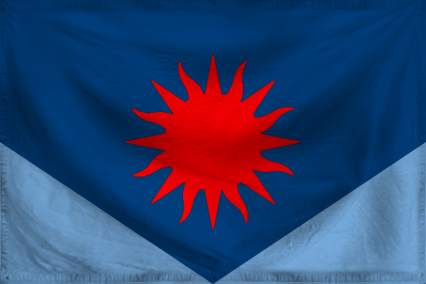 The Interplanetary Base of ReReReRepublic is a massive, cultured nation, ruled by Captain Leader with an even hand, and notable for its daily referendums, ubiquitous missile silos, and restrictive gun laws. The hard-nosed population of 3.284 billion ReReReRepublicians are fiercely patriotic and enjoy great social equality; they tend to view other, more capitalist countries as somewhat immoral and corrupt.

The enormous, socially-minded government prioritizes Education, with Environment, Law & Order, and Administration also on the agenda, while Spirituality isn't funded at all. It meets to discuss matters of state in the capital city of Home Page. The average income tax rate is 91.3%, and even higher for the wealthy.

The frighteningly efficient ReReReRepublician economy, worth 409 trillion Quris a year, is quite specialized and mostly made up of the Information Technology industry, with significant contributions from Beef-Based Agriculture and Book Publishing. State-owned companies are common. Average income is an impressive 124,638 Quris, and distributed extremely evenly, with practically no difference between the richest and poorest citizens.

Explicit slash fiction is repackaged for kindergarten kids as stories about friends cuddling friends, the police think a properly conducted criminal investigation is a real pain, anniversaries of major historical events pass unnoticed, and it is illegal for police officers to carry out searches due to strict privacy laws. Crime, especially youth-related, is totally unknown, thanks to a well-funded police force and progressive social policies in education and welfare. ReReReRepublic's national animal is the Common Crow, which soars majestically through the nation's famously clear skies.

ReReReRepublic is ranked 75,517th in the world and 2,237th in The East Pacific for Most Corrupt Governments, with 10.8 kickbacks per hour.

Order of the saint Dumas,