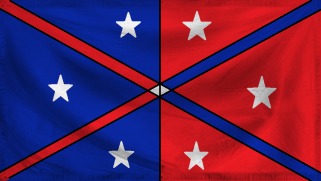 Early stage of breeding leonberger with a wolf to create the Ranorian Wolfhound.

The Ranorian Wolfhound is very similar to the German Shepherd in frame, abilities, and obedience. It was bred with the basis of the Leonberger, a 160+ pound, intensely loyal breed, in mind. The military wanted a huge, powerful animal that would terrify anyone who stood against it, yet one that was loyal enough to be trained.

The breeders proceeded to breed the largest, strongest wolves in order to reep the largest of them and improve the gene pool

By 1910, the breeders had managed to get around ninety percent of the new wolves to around one hundred and seventy pounds, and from there bred them with the Leonbergers from Germany. And, every ten years, the government orders a hunt, in order to bring in new massive wolves and try to create new Wolfhounds, in order to prevent excessive inbreeding.

Obviously, there were complications. Breeding such massive, alpha-male type wolves with a dog that demanded respect and strong training resulted in beasts that were hard to control, even if their primal instincts were dampened somewhat through the Leonbergers. As such, the Wolfhounds are primarily used as military and police dogs, but occasionally one can find a domestic one, and they are said to make great pets when bred, and trained, properly.

Weight: 155-190 pounds
Height: .87-1.1 meters at the shoulder
Length:1.7-1.85 meters
Running Speed: 48-60 kilometers per hour
Bite Force: 1,100-1,350 Pounds
Other: Ranorian Wolfhounds have rough fur that dries quickly, and their colors range from black to gray to white, with a few taking on a golden tint, and often these colors are intermixed. These dogs are difficult to train, but only because they command an owner that earns their respect. Once that is done, they are loyal to the death. It is rare to find one of these massive animals as a house pet, and there have been instances of the dogs attacking people, more often in defense than not. They also tend to make great guard dogs, for obvious reasons, and their owner needn't fear having them in the woods, because there are very few animals that can match their power.

Later, in the 1930s, breeders wanted to have a more docile branch off of the breed, and managed to get the animals to breed with golden retrievers. The result? A smaller, almost completely-non-aggressive dog that maintained a good deal of the size. The "Golden Wolfhound," as it has been dubbed, has a softer fur complexion, as well.

Weight: 135-160 pounds
Height: .77-1 meter at the shoulder
Length:1.5-1.75 meters
Bite Force 450-800 pounds
Running Speed: 40-55 kilometers per hour
Other: Golden Wolfhounds have rather soft fur, with a thin base layer protecting them from the cold and a second layer that lays flat on their body. They are normally golden colored, but some have been known to be tan or black. They are extremely loyal, and desire to please those who earn their respect, or their friendship. Their noses are also extremely sensitive, giving them the ability to locate drugs or gunpowder, but especially game such as ducks. They are outstanding hunting dogs. Finally, they tend to be very protective of children, and families keeping these massive animals as pets can rest at ease, even if an infant snuggling with, smacking, and pulling the ears of such a colossal dog is a bit worrisome.

Problems with domestic pets have included the dogs becoming extremely protective of newborn infants, to the point of being wary of even the child's parents, but the only cases of one the dogs biting an owner has been in the case of their owner either beating a child or the dog itself. The dogs are trustworthy to the point that they will not respond to violence against themselves from their owners unless absolutely necessary.

In 2012, new technology known as CRISPR-Cas9 came to light. Military-sponsored breeders had been attempting, with little success, to breed the Ranorian Wolfhounds to possess a myostatin deficiency as a result of a mutation in the MTSN gene. With CRISPR's ability to cut out and modify certain genes, the population of the dogs soon possessed the mutation. While it took time, as the technology is not perfect, almost all Ranorian Wolfhounds now possess what, in humans, is referred to as 'Hercules Gene,' in which the skeletal muscles fail to produce sufficient myostatin to hinder muscular hypertrophy.

CRISPR was used for more than just that though. Rather than stopping at powerful musculature, the technology was used to disrupt the LRP5 gene in the wolfhounds, to create a significantly denser, nearly indestructible bone structure. In addition, the dog's pain sensors were effectively shut off by forcing, and breeding, a homozygous mutation of the PRDM12 gene. This made the dogs more difficult, but not impossible, to train.

Finally, the dogs are given natural and synthetic testosterone injections for as long as their military service is ongoing.

As a result, the military's new wave of Wolfhounds, known as 'Great Ranorian Wolfhounds,' are larger, stronger, faster...really just more lethal, than the old breed. These dogs are powerful enough to equip with the infantry's standard liquid body armor to an extent without impeding movement, as well as occasionally carrying supplies. These dogs are, frankly, built like a tank, and more than capable of ripping most infantry, whom are likely smaller than them, to shreds. They can take bullets without flinching, and are generally aggressive.

Drawbacks to these animals: They are extremely expensive. The CRISPR treatments, which must be used to introduce new Great Ranorian Wolfhounds into the gene pool to prevent inbreeding, are inexpensive, but still an extra expense, and each Great Wolfhound's life expectancy is around six to eight years due to their massive frame. And, of course, feeding a dog that makes most large men look small by comparison is no small feet. Especially while in military service, the dogs must be fed an extremely high quality diet to maintain their ferocious build.

Great Ranorian Wolfhounds are not found as pets outside of select military higher ups, retired soldiers who took the dogs with them, and government officials. Even those dogs are spayed or castrated to prevent unauthorized breeding, and breeders themselves are tightly monitored. The only way for someone to get their hands on one of these animals outside of these criteria is to apply for adoption if one of the dogs is injured in battle.

Notably, the Chief Governor of Ranoria, Reimund Victor Reiss, has one of each variety of the Ranorian Wolfhound in his office. Their names, respectively, are Fenrir, Gilded, and Cerberus.

Characteristics, Great Ranorian Wolfhound:
Weight: 180-215 pounds (190-230 pounds w/ testosterone treatment)
Height: .95-1.15 meters at the shoulder
Length:1.8-1.9 meters
Running Speed: 55-65 kilometers per hour
Bite Force: 1,500-1,950 Pounds
Other: Ranorian Wolfhounds have rough fur that dries quickly, and their colors range from black to gray to white, with a few taking on a golden tint, and often these colors are intermixed. While difficult to train, Great variations are very rarely found in the civilian population, as they are, essentially, born to be used as weapons, and in the case of a poorly trained animal it would be almost impossible to emerge victorious. The sheer power of a Great Ranorian Wolfhound cannot be understated, and their bite force can tear through virtually any material equipped to most modern day infantry. When well trained, the dogs are loyal to a fault, and incredibly useful in military operations.

The Confederate Republic of Ranoria