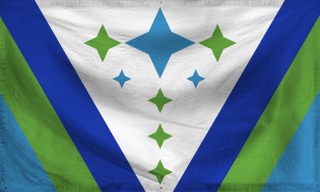 The Constitutional Republic of Rahul Raghuraman is a gargantuan, cultured nation, ruled by President Sary Hykks with a fair hand, and notable for its free-roaming dinosaurs, national health service, and keen interest in outer space. The compassionate, democratic, cheerful population of 10.091 billion Unidalanians are free to do what they want with their own bodies, and vote for whomever they like in elections; if they go into business, however, they are regulated to within an inch of their lives.

The enormous, socially-minded, outspoken government juggles the competing demands of Education, Environment, and Administration. It meets to discuss matters of state in the capital city of Dauilan Megapolis. The income tax rate is 100%.

The frighteningly efficient Unidalanian economy, worth a remarkable 2,873 trillion Zoops a year, is driven entirely by a combination of government and state-owned industry, with private enterprise illegal. The industrial sector, which is highly specialized, is led by the Information Technology industry, with significant contributions from Book Publishing and Tourism. Average income is an amazing 284,712 Zoops, and distributed extremely evenly, with practically no difference between the richest and poorest citizens.

Recent protests against birds flying too low have resulted in bloodshed, babies are a small but significant export, school teachers check the staff room for hidden webcams before complaining about rebellious students, and social networking sites have discussion groups devoted to planning terrorist attacks. Crime is totally unknown. Rahul Raghuraman's national animal is the Zebra, which frolics freely in the nation's many lush forests.

Rahul Raghuraman is ranked 2,308th in the world and 2nd in Dauiland for Highest Average Incomes, with 284,712.29 Standard Monetary Units.