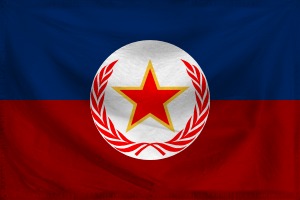 The Democratic People's Republic of Quelsh is a gargantuan, genial nation, ruled by Quelshian People's Assembly with a fair hand, and remarkable for its otherworldly petting zoo, ubiquitous missile silos, and stringent health and safety legislation. The compassionate, democratic, cheerful, devout population of 15.277 billion Quelshians enjoy a sensible mix of personal and economic freedoms, while the political process is open and the people's right to vote held sacrosanct.

The large, outspoken government prioritizes Education, although Industry, Defense, and Environment are also considered important, while Spirituality is ignored. It meets to discuss matters of state in the capital city of District 0. The average income tax rate is 91.5%, and even higher for the wealthy.

The frighteningly efficient Quelshian economy, worth a remarkable 2,558 trillion Quelsh Units a year, is quite specialized and led by the Tourism industry, with major contributions from Information Technology and Book Publishing. State-owned companies are common. Average income is an impressive 167,463 Quelsh Units, and distributed extremely evenly, with little difference between the richest and poorest citizens.

Historic buildings are being demolished to allow for road-widening in the city centre, the "temporary replacement bus service" is now a permanent fixture, cutting-edge missile systems are being retrofitted to twin-prop air force biplanes, and drug deals return to the streets as legions of undercover officers stalk the dark web. Crime is totally unknown. Quelsh's national animal is the Crocodile, which frolics freely in the nation's sparkling oceans.

Quelsh is ranked 13,097th in the world and 7th in Australialia for Most Beautiful Environments, with 1,385.09 Pounds Of Wildlife Per Square Mile.