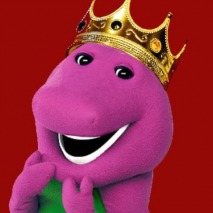 The Barney and Friends Disaster of PurpleDinosaur is a gargantuan, efficient nation, ruled by Barney with an even hand, and notable for its anti-smoking policies, smutty television, and pith helmet sales. The hard-nosed, hard-working, humorless population of 27.078 billion PurpleDinosaurians are highly moralistic and fiercely conservative, in the sense that they tend to believe most things should be outlawed. People who have good jobs and work quietly at them are lauded; others are viewed with suspicion.

The large, corrupt, moralistic government juggles the competing demands of Administration, Industry, and Education. It meets to discuss matters of state in the capital city of Hug City. The average income tax rate is 69.0%.

The frighteningly efficient PurpleDinosaurian economy, worth a remarkable 2,952 trillion Hugs a year, is fairly diversified and led by the Arms Manufacturing industry, with major contributions from Uranium Mining, Retail, and Woodchip Exports. Black market activity is rampant. State-owned companies are reasonably common. Average income is an impressive 109,031 Hugs, and evenly distributed, with the richest citizens earning only 3.4 times as much as the poorest.

Vehicular homicide by PurpleDinosaurian ambassadors is a leading cause of death throughout the world's capital cities, the wearing and manufacture of fur apparel is banned, new government leaflets tell coeliac children to eat more crisps, and suspicious glow-in-the-dark wasps remain a source of terror and awe. Crime, especially youth-related, is totally unknown, thanks to a well-funded police force and progressive social policies in education and welfare. PurpleDinosaur's national animal is the Puppy, which teeters on the brink of extinction due to widespread deforestation, and its national religion is Violetism.

PurpleDinosaur is ranked 16,781st in the world and 7th in Taijitu for Largest Manufacturing Sector, scoring 23,468.8 on the Gooback-Jerbs Productivity Index.